Since 1961, at the dawn of the offshore oil industry, Resinex has always been one of the world leaders in the marine equipment industry. The wide range of products and the high level of versatility give Resinex the capability to satisfy both small and big customers of the world seas. The administrative headquarter is in the centre of Milan and the 3 plants for the production and testing are located near Brescia, in Northern Italy. Resinex exports more than 75% of its production to the main oil producer countries and to the major ports of the world. Resinex invented and developed some of the major innovations in the field of mooring systems and navigational aids. For example, the first elastic beacon in the world was produced by Resinex in 1972. The first deep water floats in the world built for SPM systems were designed, developed and manufactured by Resinex already in the sixties. 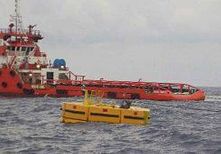 See All Resinex Products for Sale

Is this your business?

You can claim this business, which will allow you to manage your profile and your account.

Build Your Business Profile for Free