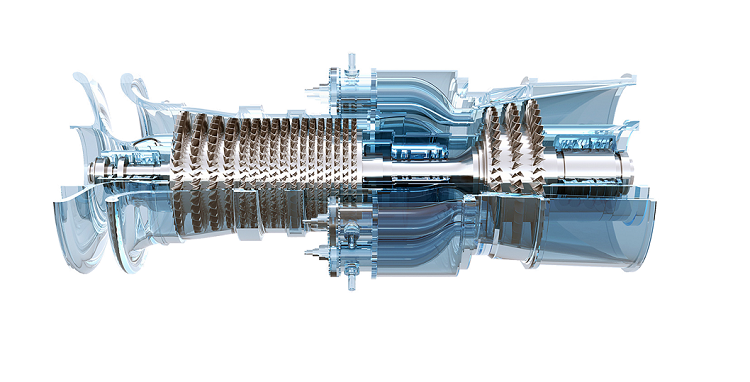 What is Heavy Duty Gas Turbine?

Heavy-duty gas turbines or heavy frame gas turbines can burn various types of liquid fuels ranging from heavy residuals to light petroleum distillates. The combustion process of light distillates such as naphtha, kerosene, and NO2 fuel oil is well proven through millions of operation hours. A gas turbine, also known as a combustion turbine, is internal combustion and continuous engine. A gas turbine derives its power from burning fuel in a combustion chamber and utilizing the flowing combustion gas energy to move a turbine exactly like the high-pressure steam that runs a steam turbine. A gas turbine works on the Brayton cycle principle, that compressed air is combined with fuel and burned under constant pressure. The output hot gas expands through a turbine to produce energy and move blades.

All kinds and classes of heavy-duty gas turbines in power plants have three main parts: combustion system, compressor, and turbine section. Also, there are many vital systems and accessories for operating correctly in a heavy-duty turbine, which is outfitted together with the turbine. Some of them are:

Heavy Duty Gas Turbines are the types of gas turbines for generating a different amount of power required in the industry. Several generations of heavy-duty gas turbines are installed and run in a combined and simple power plants' thermal cycle. These types are turbines with a gross output range from a few dozens up to more than 500 MW. Traditionally, they are categorized with capital letters like B, D, E, F, etc., classes or frames. Usually, gas turbine turbines presented in the market for applications are mostly G/H/J and D/E, F classes.

Currently, available D and E-class gas turbines are providing the range of 75–100 MW power. They can be considered as a robust and reliable workforce for those applications that superb efficiency is not expected and wherever the fuel is low-quality or cheap. They usually employ unique combustion systems to reduce emissions, comply with regulation, and simultaneously deliver required power with average performance.

F-class gas turbines work at the range of 150–230 MW and are designed for applications like a combined cycle. This type is a development class of the D and E class machines. Due to the complicated combustion system, they have optimized designs for the air and hot gas flow passages and are more efficient. As a result, certain limitations exist about the quality of fuel (mostly natural gas) in these machines. Though, in countries with strict regulations and high fuel prices, increased efficiency pays back.

Current developments in gas turbine technologies presented G, H, and J classes that have been established for a couple of decades. They are a new generation of units with a larger than 250 MW output. The efficiency of the combined cycle mode is more than 62%. These power units use state-of-the-art elements and technologies to accommodate the most efficient and clean gas-fired power.

Is Heavy Duty or Aero-derivative Gas Turbine Used in Airplanes?

The left power goes to drive energy conversion devices, which can be a propeller vessel or generator. In some cases, Turbines can be small enough to be launched on large trucks to be used in portable implementations or large projects requiring months to develop.