The Complete Guide to Diesel Engine

What is a Diesel Engine?

Diesel engines are categorized as a type of internal combustion engines (ICEs). ICE is simply one where the fuel is burned inside the main part of the engine (the cylinders) where power is generated. Diesel engines possess a wide field of applications as energy converters because of their higher efficiency. The ability of a diesel engine to start rapidly, often in less than 10 s, also makes them expressly attractive. The diesel engine has been widely used in commercial vehicles, industrial applications, and today’s passenger cars and light-duty trucks. Diesel engines also have relatively high efficiency in power generation and can also be utilized in Combined Heat and Power (CHP) systems.

If you are an expert for Diesel Engine, You can join Linquip and make your own profile and show your experiences and present yourself. 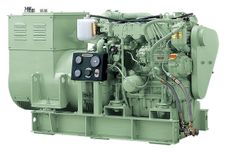 Diesel engines are intended to operate on either the two- or four-stroke cycle:
a) Four-stroke cycle: A diesel engine regularly operates by repeating a cycle of four stages or strokes, during which the piston moves up and down twice within a cycle. Air is withdrawn into the cylinder through the open-air inlet valve as the piston moves down in the intake process. Then, in the compression step, the inlet valve blocks, the piston moves up, squeezes the air mixture, and heating it up. Fuel is inserted into the hot gas through the central fuel injection valve and unconsciously ignites. Unlike a gas engine, no sparking plug is needed to onset the ignition. As the air-fuel mixture inflames and burns, it pushes the piston down, driving the crankshaft that conveys power to the wheels. Eventually, the outlet valve opens to let out the exhaust gases, pushed out by the returning piston.
b) Two-stroke cycle: In a two-stroke diesel, the complete process occurs as the piston moves up and down merely once. As a result, there are three stages in a two-stroke cycle: exhaust and intake, compression, and power. The combustion process in a diesel engine is independent—that is, the fuel and air are not premixed before combustion initiation. Consequently, rapid vaporization and mixing of fuel in the air are very important to the burning of the injected fuel. This puts much emphasis on injector nozzle design, especially in direct-injection engines. In the typical four-stroke-cycle engine, the intake and exhaust valves and the fuel injection nozzle are placed in the cylinder head. Often, dual valve arrangements—two intake and two exhaust valves—are employed.