What is a Diaphragm Valve? Working Principle & Function

Diaphragm Valves (also known as membrane valves) have a valve body with several ports, an elastomeric diaphragm, and a "weir or saddle" that serves as the diaphragm's seat. The valve body can be composed of plastic, wood, metal, or other materials, depending on the use. They're bidirectional throttle valves with an on/off switch. They're industrial tools that control the amount of fluid that can flow in and out of a valve, changing the fluid's speed and velocity. Weir-type valves are used for throttling and control, while straight-through diaphragm valves are utilized for on-off and control. It can be difficult to identify the proper diaphragm valve for your application because there are no industry standards for diaphragm valves. Before you look at your supplier's inventory, think about these factors. Valve size, pressure drop and range, kind of valve and actuator, connection type, material, and features, and applications are all items that, while not exhaustive, will at least put you on the right path.

See All Companies in Diaphragm Valve 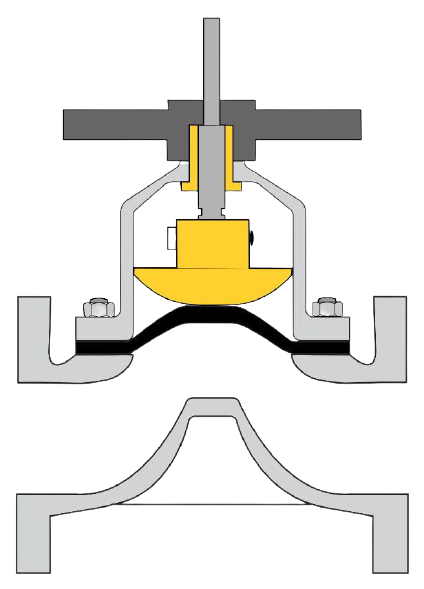 A schematic diagram of a diaphragm valve (Reference: en.wikipedia.org)

What Is Diaphragm Valve?

In a diaphragm valve (or membrane valve), there are two or more ports in the valve body, an elastomeric diaphragm, and a saddle or seat on which the diaphragm closes. According to the intended use, the valve body may be made from plastic, metal, wood, or another material.

A diaphragm valve is an on-off, bi-directional throttle valve. Fluid flow is controlled by these valves by regulating the area that media can enter and exit, effectively affecting its velocity and speed. A thin, flexible membrane controls the opening and closing of the valve, which is why they are called "diaphragm" valves. They are made from materials such as stainless steel, plastic, or single-use materials.

Diaphragm valves are similar to pinch valves but use a linear compressor that presses the thin diaphragm into contact with the valve body. The devices can be actuated both manually and automatically and provide discrete and variable pressure control. Clean, leakproof, easy to maintain, safe, and effective, diaphragm valves are well suited for moderate pressure and temperature applications, which require stop/start control of fluid flow.

There are many diaphragm valve Companies, Manufacturers and Service Providers in Linquip.

Working Principle of a Diaphragm Valve

As there is no valve stem in the flow path, there is no need for stem packing in this valve. This valve requires less maintenance than conventional valves. Diaphragms are constructed from rubberized materials so that these valves can be used in highly corrosive environments.

The placement of the diaphragm control valve and its air-operated control pilot is determined by these factors as well as the purpose of installation.

Components of a Diaphragm Valve

Function of a Diaphragm Valve

There is no direct exposure to the media within a pipeline for the operating mechanism of a diaphragm valve. Neither sticky nor viscous fluids can get into the bonnet to cause problems. Diaphragm valves allow fluids that usually clog, corrode, and gum up working parts of other valves to pass through. Conversely, the fluid being handled cannot be contaminated by the lubricant used in the operation mechanism. It is not necessary to maintain packing glands or worry about stem leaks.

Nevertheless, any elastomeric material will lose its mechanical properties at higher temperatures, resulting in possible diaphragm rupture at high pressure. Consequently, when used in applications involving elevated temperatures, this should be considered by the manufacturer.

The diaphragm valve can be used with corrosive liquids at low temperatures and pressures. These valves can be used for potable water, air, sludge, chemicals, as well as low-velocity slurries and effluents. They can be installed near pumps and bends, as well as vertical pipelines.

Diaphragm valves are widely used in many industries due to their affordability, effectiveness, and variety. There are a host of possible applications for diaphragm valves, but here are some of the most common:

Diaphragm valves have the following advantages:

The following are the drawbacks of diaphragm valves:

The diaphragm valve is a bidirectional, on-off throttle valve. By regulating the area through which media can enter and exit the valve, fluid flow can be controlled by changing its speed and velocity.