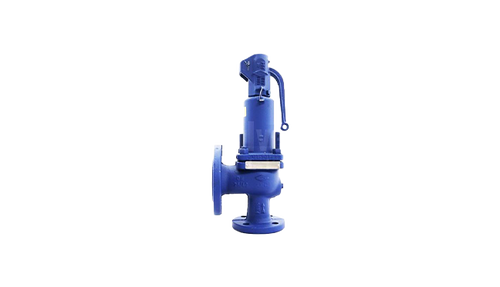 Pressure Relief Valves (sometimes called Safety and Relief Valves) are designed to open at a specific pressure and release fluid until the pressure drops to safe limits. The origins of the safety release valve are intriguing to learn about. Pressure relief valves that are properly maintained can last up to 30 years. Instead of simply replacing the valve in question, it's usually more vital to investigate the "why" behind pressure relief valve failure.

Request for Quotation
Watch a video about Safety & Relief Valve 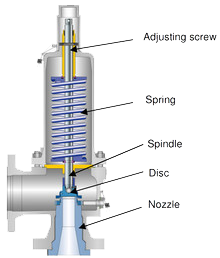 What is Safety Valve?

The safety valve functions as a fail-safe. The pressure relief valve (PRV), which automatically releases a substance when pressure or temperature exceeds preset limits, is an example of a safety valve. In the Industrial Revolution, steam boilers were the first to use safety valves. Early boilers operated without them were prone to explosions unless they were carefully operated.

Safety valves protect against pressure increases that can cause malfunctions, fire hazards, or explosions. They are used when electronic and pneumatic safety devices fail as they have only mechanical parts. By fully actuating a safety valve via the system media, it keeps it working in the event of a power failure. Safety valves open when a set pressure is exceeded; the valve first opens a little and then fully opens to remove as much unwanted pressure as possible. Safety valves open much faster than relief valves.

You can find many safety valve Companies and Manufacturers in Linquip, along with expert Service Providers.

Components of a Safety Valve

The construction of a spring-loaded safety valve is as follows:

Working Principle of a Safety Valve

At the specified overpressure, the valve is in its fully open state, allowing maximum flow. Accordingly, in order for the valves to open, the force applied by the system must exceed the equilibrium force, i.e., the spring force plus back pressure force.

Function of a Safety Valve

In general, safety valves are designed to protect lives, property, and the environment. A safety valve is used to open and release excess pressure from vessels or other equipment and to reclose and prevent the further discharge of fluid after normal conditions have been restored.

Safety valves provide a level of safety that is, in many cases, the last defense against a catastrophe. In all circumstances and at all times, the safety valve should be able to operate. It is important to remember that safety valves are not process valves or pressure regulators and should not be used as such. Only one purpose should be served by it: overpressure protection.

There are several reasons why the pressure inside a vessel or system can exceed the predetermined limit. These are the most common:

Listed above are various events that can occur independently and simultaneously. There will also be a different volume or mass flow discharged depending on the cause of overpressure. For example, a thermal expansion will create a small mass flow, and a chemical reaction will create a large mass flow. Thus, an appropriate pressure safety valve must be sized and selected by taking into account a worst-case scenario.

Linquip offers a wide variety of Distributers, Experts, and Equipment for Sale of safety valves.

Safety valves are typically installed in pressure vessels such as chemical plants, electric power boilers, and gas storage tanks to protect them from exploding or damaging.

As the pressure increases on the inlet side of the valve, the Safety Valve opens the valve disc and discharges fluid (steam or gas). When the pressure lowers to the prescribed value, the valve disc closes again. The safety valve is designated as a final safety device, as it controls the pressure and releases fluids on its own without any electrical power supporting it.

In addition to ensuring the safety of the energy industry, safety valves support the safety and security of our lives.

Typical safety valve applications include protecting against overpressure in industrial settings. There can be dangerous situations, fires, and explosions due to this overpressure. The oil, gas, and petroleum industries often use safety valves, such as downstream of pressure-reducing controls. Also, safety valves are typically used to protect boilers from overpressure in steam systems.

Below are some examples of safety valve applications:

The Oil and Gas industry, including the downstream and midstream of refining and petrochemical industry, is the largest industry for pressurized applications in the world. In these applications, you will find:

As far as valves in general and overpressure protection devices, in particular, are concerned, the Chemical industry has the highest demand compared to capacity. Safety valves are required in the following situations:

There are a lot of special requirements for cleanability, materials, and documentation in the pharmaceutical industry. In this area, safety valves are required for the following applications:

In order to protect the system against overpressure, each safety valve has some features that should be considered while selecting one:

Safety valve is usually used to protect boilers from over pressurization as well as to reduce pressure downstream. While safety valves are primarily used for safety, they are also utilized in process operations to prevent damage to products due to excess pressure.

The force Fp will decrease as the pressure in the vessel decreases. However, the flow still acts on the enlarged area of the disc at set pressure, so the valve will remain open. It is necessary to reduce the pressure further until the spring force Fs is again greater than Fp so that the safety valve can close.