Distance Vs. Displacement: All You Should Know About

Distance Vs. Displacement, two similar terminologies that should be described and compared precisely. Distance is the real path covered, and displacement is the shortest distance from an origin to a specific destination.

Before further proceeding to the Distance Vs. Displacement topic, we are going to introduce distance and displacement separately.

Distance Vs. Displacement should be compared precisely by the definition of each term separately. Distance is a mathematical measurement of how far distant objects or points are. In physics or everyday routine, the distance may indicate a physical length or an estimation based on other standards (e.g., “two counties over”).

In social sciences and psychology, distance is a non-numerical quantity; Psychological distance is designated as “the diverse ways in which an object might be eliminated from” the self along dimensions such as “social distance, time, space, and hypotheticality.

A specific path’s length returns to the origin point, such as a ball thrown straight up or the Earth when it finishes one orbit.

The term “distance” is also employed by analogy to measure non-physical entities in specific ways.

In computer science, an idea exists that tells about the “edit distance” among two strings. For instance, the words “dog” and “dot”, which differ by only one letter, are more intimate than “dog” and “cat”, which vary by three letters. This idea is applied in spell checkers and coding theory and is mathematically formalized in numerous distinct ways such as:

In mathematics, a metric space is a collection for which distances among all set members are described. In this way, several kinds of “distances” can be determined, such as traversing graphs, comparing patterns and curves, and applying unusual interpretations of “space”. The concept of distance in graph theory has been adopted to describe social networks.

In psychology, social sciences, and human geography, distance is frequently theorized not as an objective metric but as a subjective reality.

If you have your notebook in your bag and leave home and walk five meters north and reach your office, then the displacement between you and your book will be zero since you did not move away from your notebook.

Here is the basic description of Distance Vs. Displacement: Distance is the measure of how far away you have traveled so far, whereas displacement designates how far you are away from the origin point irrespective of the space you have covered.

One of the most notable distinctions between Distance Vs. Displacement is that the distance covered among the two points is regularly bigger or equal to the magnitude of displacement.

Here is a nice and comprehensive video representing fundamental differences between Distance Vs. Displacement.

Here we propose a summarized table indicating the main Distance vs. Displacement differences: 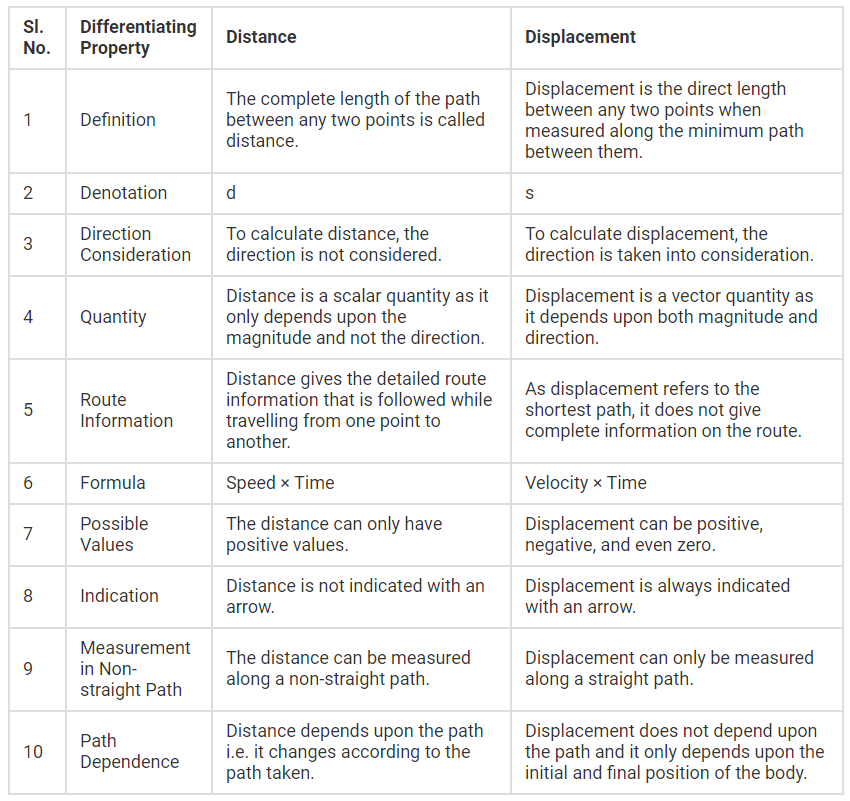 Here we introduce some formulas to determine Distance Vs. Displacement topic more accurately.

In analytic geometry, the Euclidean distance within two points of the XY-plane can be determined using the distance formula. The distance between (x1, y1) and (x2, y2) is provided by:

These formulas are readily determined by constructing a right triangle with a leg on another’s hypotenuse and employing the Pythagorean theorem. This distance formula can also be extended into the arc-length formula. Other distances with other formulas are applied in Non-Euclidean geometry.

In the Euclidean space Rn, the interval between two points is typically given by the Euclidean distance. Other distances, based on different norms, are sometimes employed instead.

p must not be an integer, but it cannot be smaller than 1; otherwise, the triangle inequality does not sustain.

The 2-norm distance is the Euclidean distance, a generalization of the Pythagorean theorem to more than two coordinates. It would be obtained if the distance between two points was estimated with a ruler: the “intuitive” idea of distance.

The 1-norm distance is more colorfully named the taxicab norm or Manhattan distance since it is the distance a car drive in a city laid out in square blocks.

The infinity norm distance is also termed Chebyshev distance. In 2D, the minimum number of moves kings need to travel between two squares on a chessboard.

The p-norm is infrequently used for p other than 1, 2, and infinity values.

In physical space, the Euclidean distance is the most reasonable one, because in this case, the length of a rigid body does not vary with rotation.

How to Calculate the Efficiency of Heat Exchangers?

Difference Between Permanent Magnet and Electromagnet

The principal difference between FDM and TDM is the way of transmitting multiple signals in the realm of time and frequency. Both FDM and...

Difference Between Grounding and Earthing

How to Find Frequency Statistics: Step by Step Guide

How to find frequency statistics is the main topic of this article. The number of times an occurrence is observed or recorded in an...