Crossflow vs Counterflow Cooling Towers: Which to Use Where

Linquip is a reliable supplier of cooling tower parts and products providing you with a variety of choices between different types and models to meet your needs and making possible a convenient interaction between the customers and manufacturers. To read more about the cooling parts and their function visit our post here.

The important point about this design for crossflow cooling towers is that the water would require only gravity for flowing down the fill to reach the cold water basin due to the fact that no force is against its flow direction.  In order for the water to be evenly distributed, hot water basins are placed above the fills, surface of which are covered by the hot water entering crossflow cooling towers.

To continue comparing crossflow vs counterflow cooling towers, we may now know about the design of counterflow cooling towers. The hot process water is sprayed down on the fill media to vertically flow down and drain onto the cold water basin. Now, the air enters the tower in a lower section and flows upwards to pass through the water flowing the fill and cool it down.

The design here dictates that the water brought to the nozzles should be pressurized due to the fact that air flows opposite to the water, and to prevent a back-flow of the water into the nozzles, an extra downward force shall be provided. In order not to restrict any airflow in the tower, the set of pressurized pipes and nozzles are placed farther apart for counterflow cooling towers compared to the nozzles of crossflow towers.

Crossflow vs Counterflow Cooling Towers: What are the Differences? 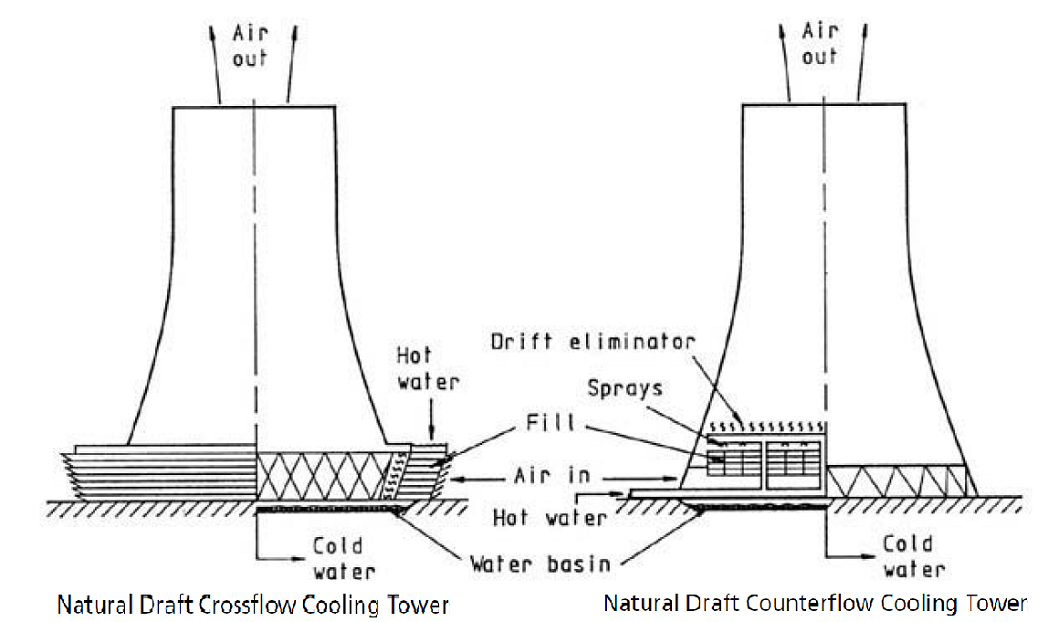 To be able to better compare crossflow vs counterflow cooling towers, let us see how they differ from each other with respect to various factors:

Maintenance: crossflow cooling towers are easier to maintain as there is a possibility to have access into the plenum and conduct any repair for the internal equipment. Moreover, the nozzles located in the distribution basin are accessible at anytime.

Climate conditions: Freezing of the water in the fills is a phenomenon that is highly detrimental to the performance and health of the system. The crossflow cooling towers are more suitable for cold climates due to the fact that the hydraulic load on those parts of the fill away from the fan become higher, which decreases the risk of water freezing in the fills. It means that the tower’s operation could also be more precisely anticipated for cold climates.

Process water output: Since crossflow cooling towers only use the gravitational force to move the water down the fill, it gives some sort of operational flexibility to the system: one could easily change the nozzles’ orifices to increase or decrease the process water output from the tower as per demand. In contrast, counterflow cooling towers do not provide such convenience for adjusting the flow through the nozzles as the access to the sprayer nozzles and sleeves is difficult.

Process water supply pressure: Due to the design of counterflow cooling towers, a pump is needed to pressurize the water supplied to the spray nozzles to account for the counter flow path of the water and the air. This means that crossflow cooling towers are slightly more efficient in terms of electrical power consumption.

Which one should you choose?

In general, the choice of crossflow vs counterflow cooling towers completely depends on the application and the characteristics of the intended site. We could help you identify the best solution for your requirements.

More on the the differences

To see a video comparing the crossflow vs. counterflow cooling towers click here.

HRV vs ERV: Choosing Between Remarkable Types of Ventilation Systems

Types of Ventilation and All Should Know About

As the topic shows, we want to talk about types of ventilation. But first think about these questions. Can you imagine the world with...

Regulating and controlling fresh air in our home is an essential point of keeping good indoor air quality, which is applicable by Energy Recovery...

Cooling towers are an integral component of many refrigeration systems. They are the point in the system where heat is rejected to the atmosphere...

The Essential Guide to the Types of Air Compressors

You have probably come across the name of some types of air compressors such as “rotary” or “reciprocating”, if you ever had to purchase...