Like any machine, a DC generator consists of different parts. It is an electrical instrument that transforms mechanical energy into electricity. The working principle, different types as well as pros and cons will be discussed besides parts of DC generators in detail at Linquip.

These are the parts of DC generators and will be discussed below in more detail.

Read More on Linquip
Parts of Generator: a Simple, Yet Useful Guide

A direct-current (DC) generator consists of two main parts, a rotating section and a fixed one. Stator is the stationary part of this system that includes a core, stator winding, and the outer frame and houses the rotor (the rotating part) in its core.

Among parts of dc generators, the stator is a key component and its main function is to supply magnetic fields around which the coils spin. This contains stable magnets with opposite poles facing two of them. These magnets are mounted in the rotor field.

Read More on Linquip
Difference between AC and DC generators: An easy to understand guide 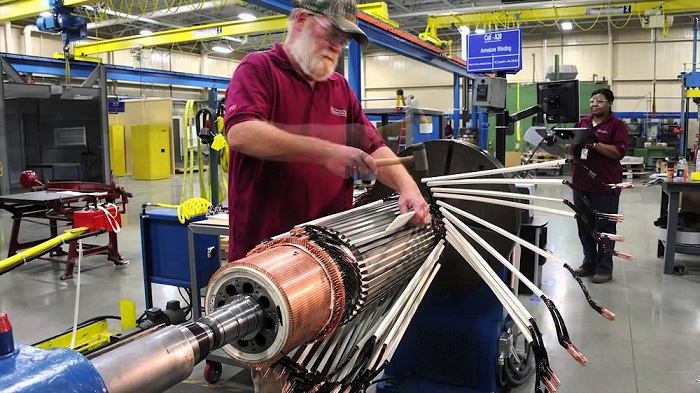 The second important component of a DC generator is the rotor or armature core that is consisted of a fan, armature, commutator, and a shaft. Unlike the stator, this part is moveable and rotates in the magnetic field created by the stator. In a DC generator, the armature’s rotation is the process that generates a voltage in the rotor coils. The armature core includes iron slot laminations with slots that have been stacked to form a cylindrical armature core. Generally, the losses are decreased due to the eddy current in these laminations.

During the whole process, the fan is responsible to supply the needed air for the armature core or rotor as it spins.

End housings are the components attached to the ending parts of the mainframe with a function to protect the bearings. The bearings are the essential parts of the system that lessen the friction between the moving and the fixed parts of the generator that can gradually deteriorate them over time.

While the front housings protect the bearing plus the brush collection, the end housings’ function is limited to support the bearings only.

Bearings are used in a system to achieve a smooth movement between the different components. The main function of bearings is to minimize the friction between the rotating and stationary parts of the machine. Thanks to these parts, there is no need for the continual lubrication of the system components and they would also last longer due to the reduction in friction.

Bearings are mainly made from high carbon steel as it is a very hard material and are designed in a way to be constantly greased and protected from the dust intrusion.

Bearings come in two common forms: roller bearings and ball bearings. Ball bearings include spherical balls that transfer the load from the inside to the outside and creates motion in circles. Ball bearings can be easily found in the items around the house; they are more common because they are simple.

Roller bearings, unlike ball bearings, are consisted of different forms of cylinders. While ball bearings’ contact area with the load is limited to a point, in roller bearings this contact is extended to a line so they can be used to handle heavy loads and, thus, are mainly used in industrial equipment. 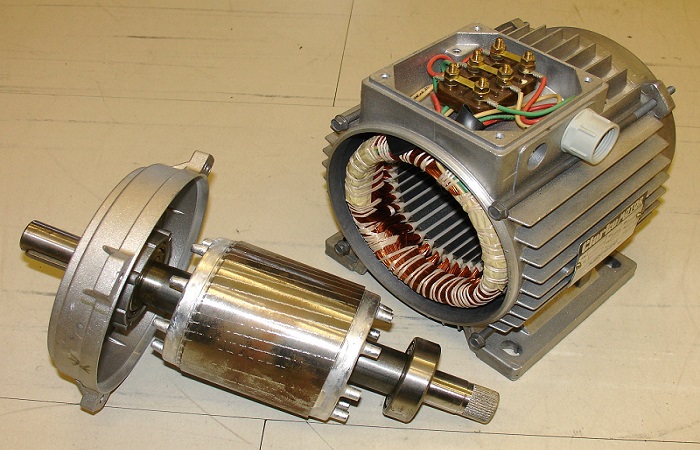 If we divide the DC generator parts in two, Yoke is the outer cover that not only provides mechanical protection to the whole inner assembly and fixes them to the foundation of the machine, but also creates a path for the magnetic flow that the field winding produces.

Based on the size of the machines, yokes are of two kinds and materials; in large apparatuses, yokes are made up of cast or rolled steel while in smaller ones they are composed of cast iron.

Poles are used primarily to keep windings in the sector. Such windings are usually wound on the poles and are otherwise connected to the armature windings in order. Therefore, by using the screws, the poles join the welding technique to the yoke.

The pole core is mainly made of a number of thin annealed steel or wrought iron joined together by the use of hydraulic pressure. To reduce the Eddy Current loss, the poles of a DC machine are laminated.

These poles are one of the parts of the DC machine whose job is to support the field coils, and ensure a more integrated magnetic flow over the armature.

The pole shoe is an iron or steel plate that used primarily to disperse the magnetic flow and avoid the spinning field coil from falling.

The operation of the commutator is like a rectifier to convert AC voltage to DC voltage in the reinforcement of the armature winding. This conductive metal ring has a copper segment and each copper segment with the aid of mica sheets is shielded from each other.

This cylindrical electrical switch sits on the machine’s shaft and contributes in connecting the conductors of the rotating armchair to the external circuit that is fixed. In the process, the original induced current is converted to a unidirectional one in the output terminals.

Brushes are one of the essential parts of the DM generator. With the aid of these carbon blocks, the electrical connection between the commutator and the external load circuit can be assured.

Due to the arc discharge and the ongoing contact with the commutator, however, these components deteriorate over time. But the good news is they can always be replaced with new brushes. All you need to do is check them from time to time and make sure they are in a good condition and change them if needed.

The shaft is a mechanical piece in a DC machine that produces the rotational of a force known as torque and brings about rotation. It is made from mild steel and has a maximum breaking strength. Of parts of DC generator, the shaft helps the generator to transfer mechanical energy through the shaft. The spinning parts are keyed into the shaft like the armature center, a commutator, a cooling fan, etc.

This is a permanent magnet that generates a magnetic field that is used to rotate the coil.

For holding the armature windings, the armature core slots are primarily used. They are connected in a closed-circuit winding form in series to increase the amount of produced current; and they are parallel. This special arrangement of conductors is called the armature winding that is known to be the heart of a DC generator. Depending on the kind of connections, armature windings are either lap winding or wave winding.

But, wait! It was not just parts of DC generator and its equation. You can find more information about DC generators! DC generators in fact, are used almost everywhere. They are used in factories that manufacture aluminum, chlorine, and related raw materials in a large quantity of current. Dc generators are also used in diesel-electric-engine locomotives and vehicles. They can be found in remote control autos, electric car windows, and TVs with flat screen. 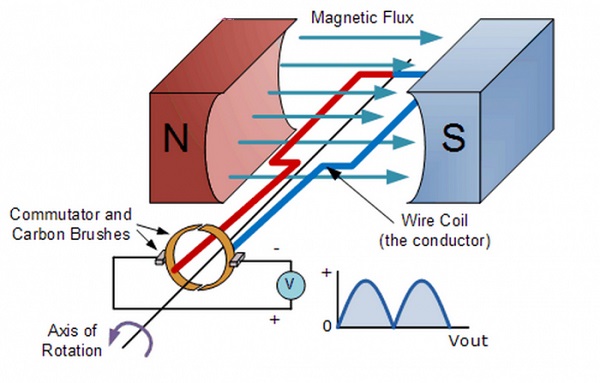 Read More on Linquip
Alternator vs Generator: Your go-to guide to learn their difference

What is the Working principle of DC generator? How Does it Work?

The working principle of DC generators is based on Faraday’s laws of electromagnetic induction. Within the parts of dc generator, when a conductor is in a dynamic magnetic field, an electromotive force is generated within the conductor. The magnitude caused by EMF can be measured using the electromotive power equation of a generator.

What are the Types of DC generator?

DC generators can be classified into two main categories (separately excited and self-excited). There is also a third type of DC generators which is called, “Permanent-magnet DC generator”. Each type has its unique features, frameworks, and advantages.

In many fields, we need a DC generator especially for the following reasons:

DC generator can generate some disadvantages as well

Like other machines, DC generators have some disadvantages, such as:

This was all about DC generators . From what you read above, we can say that the main advantages of DC generators include simple design, simple parallel operation, and fewer problems of system stability. You also read about different types of DC generators and their working principle. However, you might need to know more about their design and some other information. So, you can leave your questions in the comment by signing up at Linquip (in the parts of dc generator article) and get your answers.