An important device that significantly lowers the costs of air conditioning is the HVAC economizer. Despite being an effective agent in increasing the system’s efficiency, many still do not know about it.

Linquip has established a platform for you to find the right solution for your HVAC system requirements. In this article, you will find what you need to know about economizers and learn how to identify whether your system has one.

What is an HVAC Economizer?

This device constantly evaluates the temperature and humidity of the outside air and when appropriate, it cuts or decreases the work load on the air-conditioning system and utilizes the outside air for cooling of the building.

The task of air quality assessment would be done by a control logic and some sensors to feed the measurement signals to the controller to identify how much air might be needed to be directed from outside into the building. The amount of inlet air is mechanically adjusted by dampers.

An HVAC economizer comes in many types that are chosen based on the requirements of the HVAC system, be it technical or financial requirements. 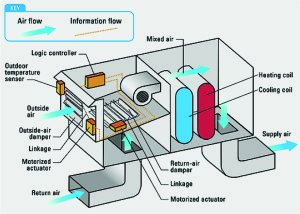 To makeup for the shortcoming of dry-bulb economizers, a single enthalpy economizer also measures the humidity level. This has resulted in these economizers dominating the market for effective HVAC economizer solutions.

A differential enthalpy economizer is even more sophisticated than the other two types. In this type, the system also measures the amount of return air as well as the air to be directed outside. These systems are mostly seen for single large HVAC systems that are to manage distribution of air to various number of zones.

There are also integrated differential enthalpy economizers in which the measurements and operation is pretty much identical to the previous type, except that the economizer’s controller first compares the outside temperature with the inside’s to see if the outside air would be sufficient for delivering the cooling task without starting the compressor and if the cooling was not sufficient, compressor would then be started.

The benefits of HVAC Economizer

An HVAC economizer brings many significant benefits to the air-conditioning system, and the benefits of knowing about economizers could go to both the users and the technicians of the HVAC industry.
One can consider the following three advantages of arranging an HVAC economizer in the system:

1. Since the A/C units consume a lot of energy, having them running for long hours would significantly increase the electricity bill, and it is something that no one wants. By actively comparing the inside air conditions against the outside’s, and using outside air to sometimes take on the responsibility of air conditioning job instead of constant running of the A/C unit, a lot of energy could be saved that leads to considerable amounts of financial savings as well.

2. By monitoring the inside and outside air and increasing the use of outside air, an HVAC economizer also increases the level of ventilation which is a factor contributing to improvement of the air quality in the intended space.

3. Adding interruptions to the operation of A/C units not only lowers the amount of money savings through less energy consumption, but it would improve the lifespan of unit by lowering the work load on it. This is due to the decrease of wear and tear which is in part due to operation of the HVAC system. This would also raise the system’s reliability by lowering breakdowns, as well as less maintenance costs.

Knowing about these benefits could motivate the users of HVAC systems to make sure they have HVAC economizers to optimize their operation and lower their costs in the long run.
In addition, From a technician’s standpoint, knowing about these systems could provide the means of negotiation to persuade the end user to install or maintain these devices that would later save a lot of money for them despite adding to the initial costs of the building the HVAC system.

Checking the HVAC System for Economizers

It could be hard for a non-expert such as the owner/manager of a property or a facility to know whether an economizer is installed within the HVAC system. Moreover, identification of proper functioning of the economizer is another important task that requires professional help.

Therefore, it is highly recommended for the user to seek some professional expertise to assess the current state of the HVAC system regarding economizers and take the necessary steps to have it in good shape.

You can learn some interesting details about hvac economizers in the four-part video here.