We are going to talk about different types of solar hybrid power systems in this post in an effort to provide a convenient platform for our customers to find solutions to their renewable energy problems, and also to get a good grasp of what they are dealing with.

What are Solar Hybrid Power Systems?

Solar hybrid power systems are one of the implemented hybrid power systems in which a photovoltaic (PV) system harvests solar energy and generates solar power, is integrated with another power generating source. Despite these systems promising future, they have not yet reached their full potential and development.

A common type of these second power sources is the diesel generator or genset that is intended to compensate for the generated power deficit of the PV power system. There are also two other types of solar hybrid power systems worth mentioning. One is the hybrid solar PV-wind systems, for which the power wind also comes to help with energy generation. The other is the solar thermal hybrid systems in which PV cells are combined with solar thermal collectors, not only to produce electricity but also heat. 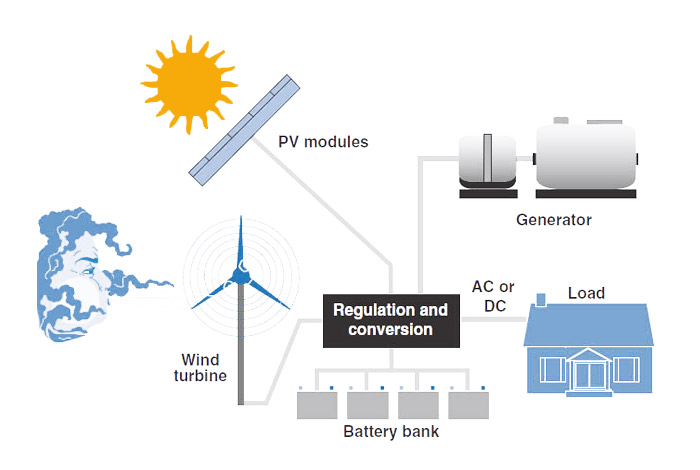 The PV system consists of many PV modules and panels that make up a complete photovoltaic power-generating unit. Their panels absorb the sun’s rays and convert the received energy to electricity. In other words, they convert the solar radiation energy to direct current.

It could be the power grid, diesel, wind, etc.

This is a system that is responsible for monitoring the power demand as well the rate of power generation at the primary power source in order to ascertain a consistent power generation by employing the complementary power source when and as much as needed, as well as charging the batteries or using them when appropriate. One of the advantages of using EMS is that it can be configured based on different user preferences based on the monitored system parameters.

The direct current produced by the PV system is not so useful. Solar invertors are used to convert the DC output of the photovoltaic panel into a nice 240v alternating current (AC) output.

Batteries store the extra produced energy for later use when there is no or not enough PV production, or in a case where both the PV and the complementary power source cannot produce enough energy to meet the power demand from the system.

To see a video of sizing considerations for such a hybrid power system, you can see this video.

Read More On Linquip
Types of Solar Energy: Learn the Basics, Get the Most Out of It!

As was mentioned earlier, solar diesel hybrid systems couple photovoltaics and diesel generators, which are also called diesel gensets. Diesel gensets are intended for these systems in order to make up for solar power generation fluctuations, and there would be batter storage to enhance the overall efficiency of the system as well as an energy management system that monitors solar energy fluctuations and diesel genset operation compared with the distance from its power generation limits, so that it would decide when to charge or use the batteries for a consistent power output. 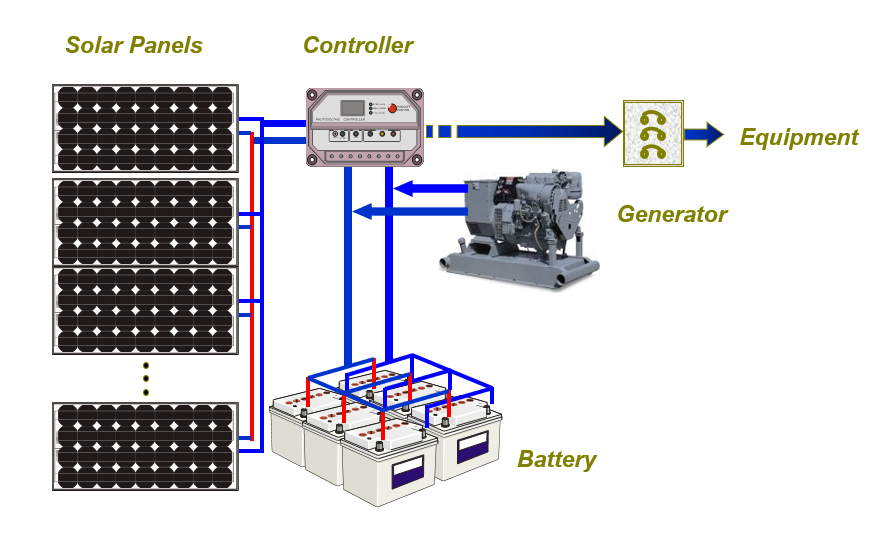 The use of diesel gensets in solar hybrid power systems instead of coupling the solar system with the power grid will most likely occur when the grid strength is poor and there are recurring power outages.

For all hybrid power systems, there is a main energy supplier. For this case, the main power system could be either the diesel power generator, or the solar PV. In the first scenario, the goal is to reduce fuel expenditures by adding extra energy from the photovoltaics system. In the second scenario, which is the actual intention of this post, the diesel genset is intended to compensate for energy generation fluctuations of the solar PV alongside batteries and an energy management system to optimize both the fuel efficiency and power generation consistency.

Multiple advantages can be considered for solar diesel hybrid power systems. Excessive power generation will be stored in the batteries for later use or can also be sent off to the power grid. However, with proper selection and use of equipment, all the energy can be used without getting waster or being fed back into the grid. The use of diesel gensets alongside batteries for these power systems ensures a consistent and uninterruptible energy production even when PV production is not enough, or the grid fails. Moreover, these systems are of course more friendly to the environment than those that solely rely on fossil fuels for power generation because of their emphasis on the solar part of power generation and producing less pollutants such as carbon monoxide the way systems only reliant on fossil fuel burning do.

The other important type of solar hybrid power systems is the solar PV-wind hybrid power system, in which the complementary power source is the wind. This is a genuinely nice combination as both of solar and wind are among the renewable energy sources. Another nice point about coupling wind and solar power systems with each other is that normally the peaks of solar energy occurs when wind is not that strong, and wind peak operating times occur when the solar energy is nonexistent or at least weak. This means that these systems are inherently less fluctuating in terms of power generation. 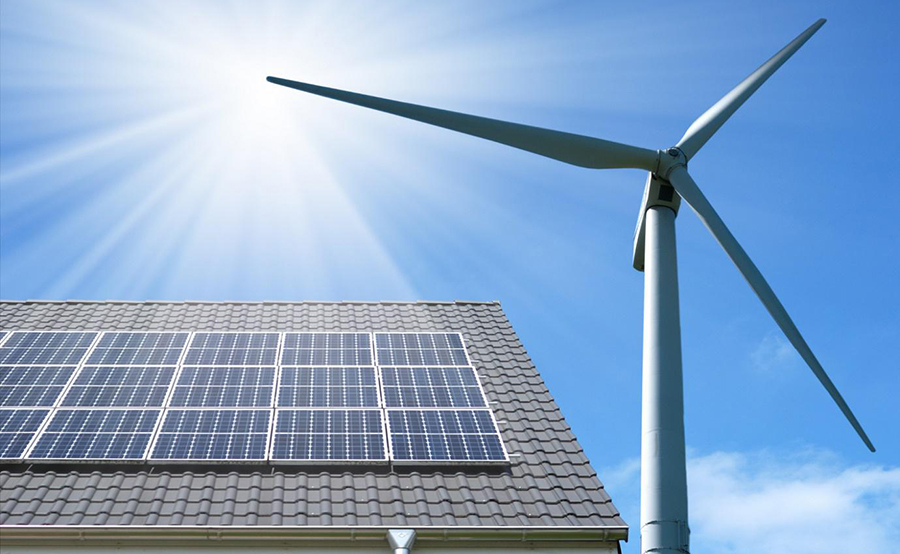 The logic behind their design is quite fascinating. Well, you can expect from your photovoltaic cells to reach a 20% electrical efficiency which means that they can only convert that much of sun’s radiation into electrical energy. However, about 65% to 70% of that radiative energy of the sun will turn into heat, raising the temperature of the PV modules. These hybrid systems are designed in a way to harvest that absorbed heat using components called PVT collectors to better use the solar spectrum.

Since these systems are designed to direct the absorbed heat from the system surface areas away towards heating purposes where needed, the surface temperature of the modules will be lowered, which means their lifetime will be extended. Well, this increases the overall efficiency of the system for sure but will lower the efficiency of the solar collector due to lowered surface temperatures.

The PVT collectors we talked about a little earlier have different commercially used types. PVT liquid collectors and PVT air collectors are among the common ones which are categorized based on their heat transfer medium. You can classify PVT collectors based on how they handle heat losses as well. Uncovered PVT collector (WISC PVT), covered PVT, and Concentrating PVT collectors (CPVT) belong to this way of classification.