Everything You Need To Know About Different Types Of Compressor

A Compressor is a pump used to increase the low pressure of air to a greater pressure. Nowadays compressors play an integral role in the home and industrial applications. Without them, large parts of the world would stand still. Therefore, understanding different types of compressor will help you find the right one that best meets your need. In this article, we will take a closer look at different compressor types and their features. Follow this new blog in Linquip to find out more. 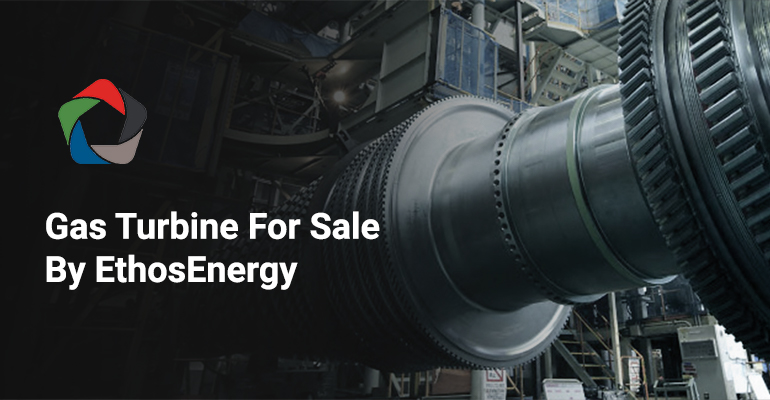 Here we explain these types of compressor in detail.

In positive displacement compression, the air is drawn into one or more compression chambers, which are then closed off from the inlet. The enclosed volume of each chamber decreases through the displacement of one or more moving parts and the pressure increases, compressing the air internally. Once the pressure reaches the maximum pressure ratio, a port or valve opens; the continued reduction of volume in the compression chamber discharges the air into the outlet system. 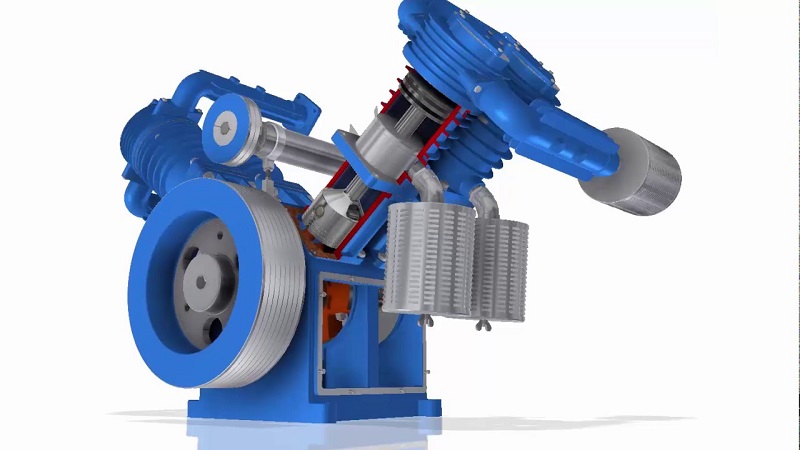 These compressors are less costly compared to other types of reciprocating air compressors and are very easy to maintain. Besides, they are best for cycles having medium duty.

The major disadvantage of the single-acting air compressor is that it has a piston that works in only one direction at a time. Plus, the spring takes up space and bounds the cylinder working stroke. 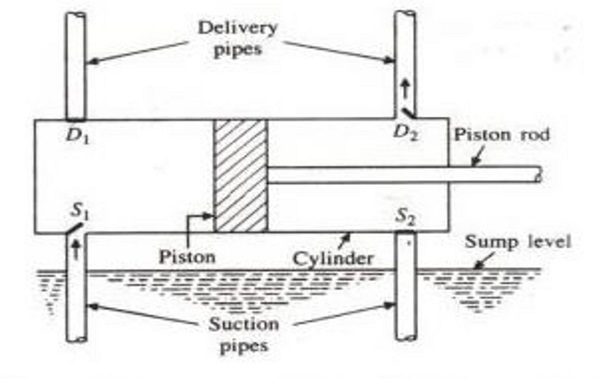 The double-acting compressor is a very famous type of positive displacement compressor from the category of a reciprocating air compressor that compresses the air on both the up-stroke and the down-stroke of the piston, doubling the capacity of a given cylinder size.

The disadvantage of these compressors is that the initial cost of this compressor is high and it requires high space for installation as compared to the single-acting compressor. 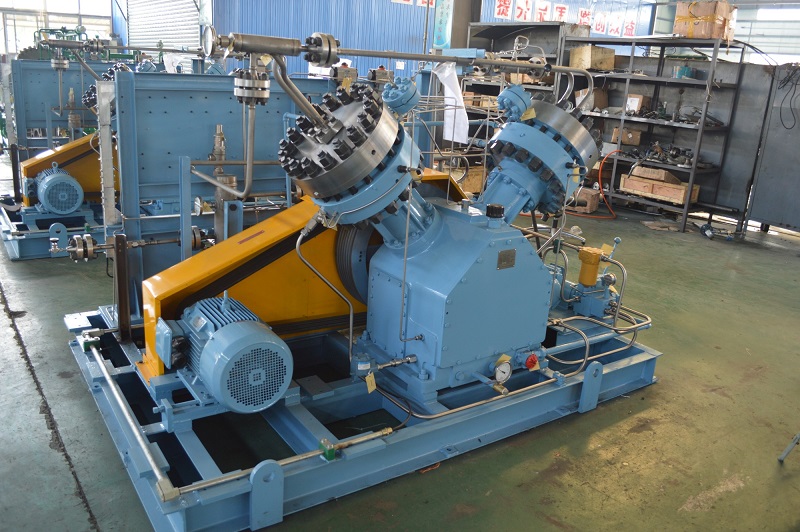 Diaphragm compressor also known as membrane compressor compresses the air by using a rotating membrane, to draw air into the compression area and give it the pressure to be stored in the storage tube section.

These types of compressors come in two designs: V-shaped and in-line. 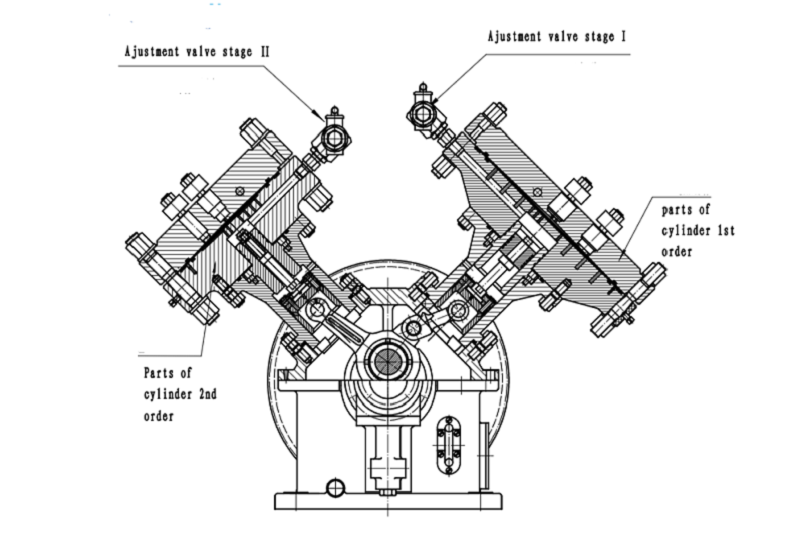 V-shaped compressors are a type of reciprocating compressors in which the different cylinders of a compressor are displaced by certain degrees to form a V-shape which might be connected to two different pins on the crankshaft, and concentric valves that are mounted on each cylinder head unit.

The major benefit of the V-shaped alignment is to provide better torque and balancing, to the compressor system. The drawback is that V-shaped compressors shake the tank a bit more and are noisier than the in-line design. 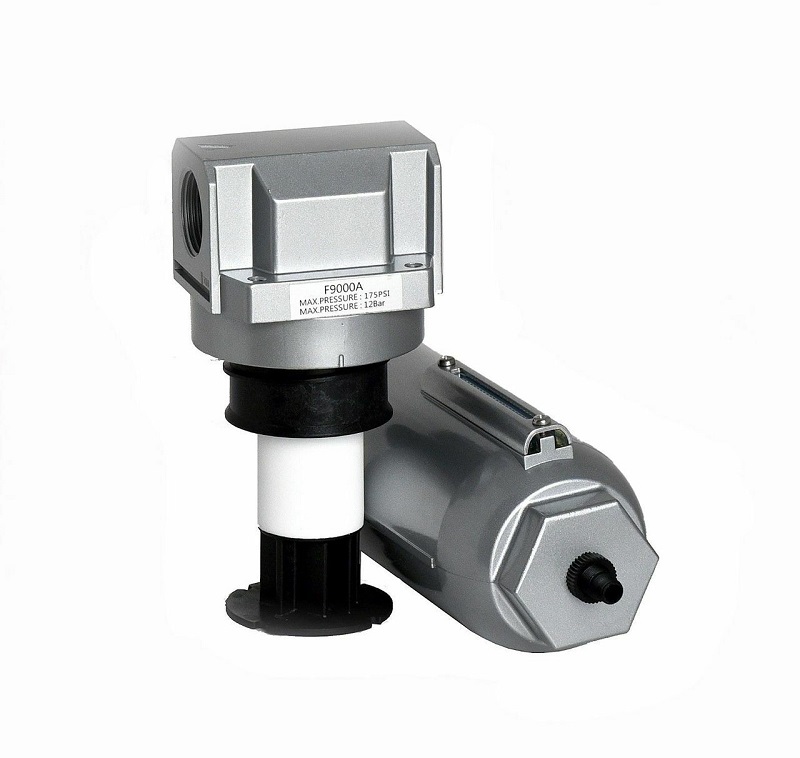 In-line compressors have cylinders in a straight line. These compressors are smoother and shake less, but they run warmer.

The rotary-lobe compressor is a variant of the rotary-type positive displacement compressor. They are typically known as roots-type blowers or vacuum boosters, according to the situation in which they are used. 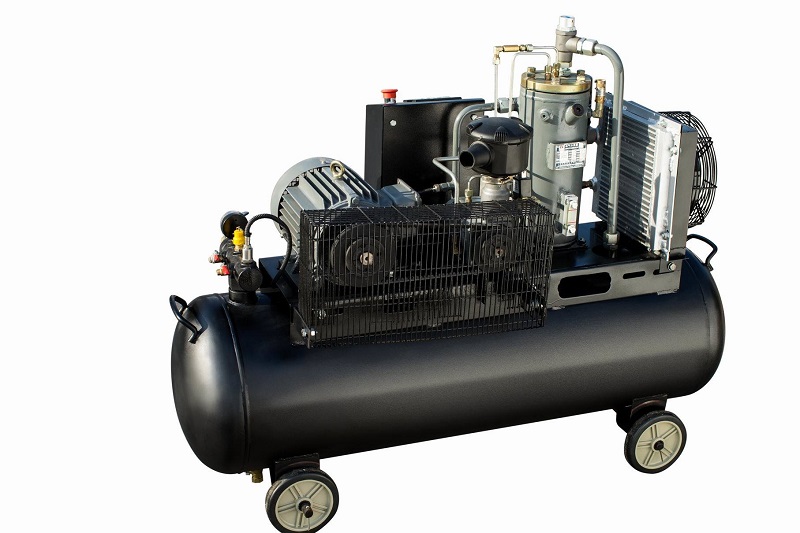 A rotary screw compressor is a type of positive-displacement compressor that operates by trapping air between two meshed rotors and reducing the volume of that trapped air as it moves down through the rotors. This reduction in volume results in compressed air, which can then be used to power air tools, inflate tires, or in numerous other applications.

Rotary screw compressors are generally used to supply compressed air for larger industrial applications. They are best applied in applications that have a continuous air demand such as food packaging plants and automated manufacturing systems although a large enough number of intermittent demands, along with some storage, will also present a suitably continuous load. 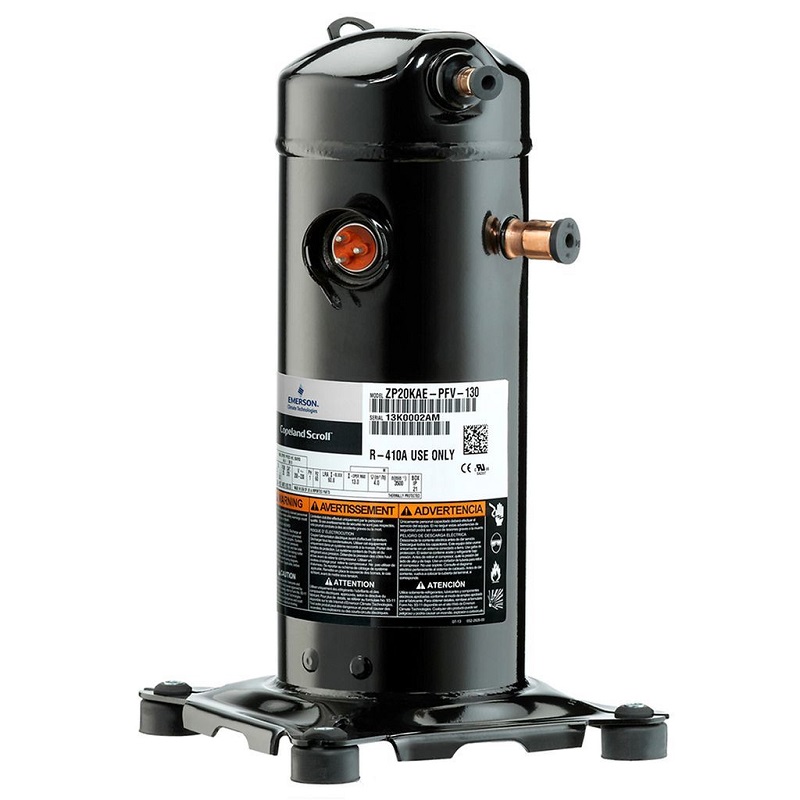 The Rotary Scroll compressor is a popular style compressor and is used primarily for air conditioning refrigerant systems. Scroll compressors operate on the principle of two intermeshing spirals or scrolls with one being stationary while the other rotates or orbits concerning it.  They are mounted with 180° phase displacement between them which forms air pockets having different volumes.  Air enters through the inlet port located in the rotating/orbiting scroll which fills the chambers and is moved along and compressed along the scroll surfaces.

The advantages of a Rotary Scroll Compressor include: 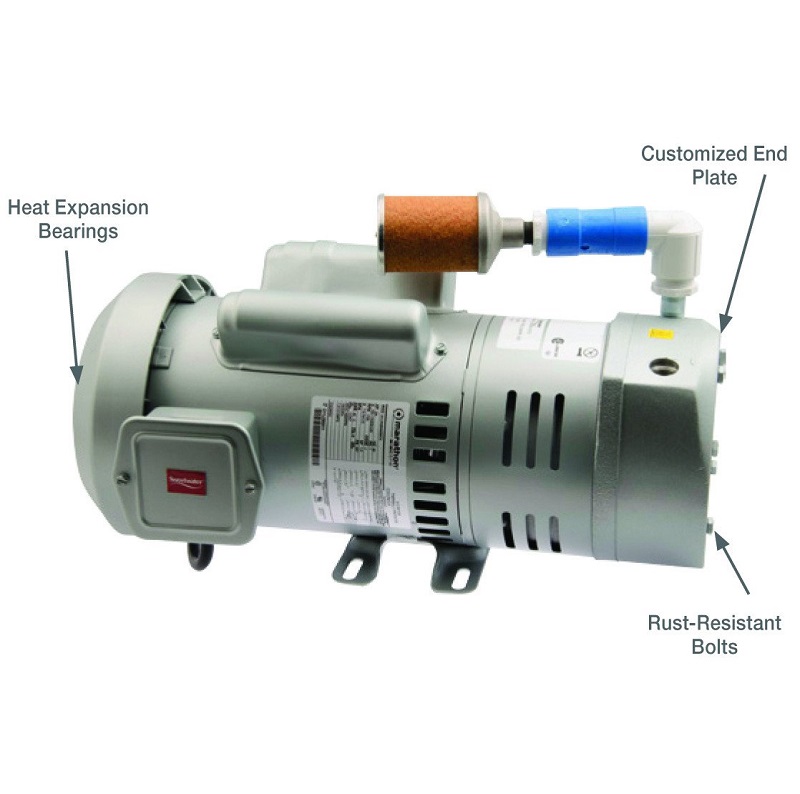 Rotary vane compressors consist of a cylindrical casing, two openings (one suction and one discharge), and a rotor positioned eccentrically concerning the casing. Compression occurs by refrigerant flowing into the chamber where, due to eccentric rotation, there is a reduction in the desired volume.

The advantages of rotary vane compressors are low cost and compact dimensions, making these the best choice for low capacity home applications such as fridge-freezers and air conditioners.

A liquid-ring compressor is a rotating positive-displacement device that is very similar to a rotary vane compressor; it differs in having vanes that are an integral part of the rotor that churn a rotating ring of liquid to form the compression chamber seal.

In a liquid-ring compressor, an offset rotor is placed in a cylindrical housing, and fluid (typically water) is fed into this housing. As the rotor spins, the water is thrown by centrifugal force to the outside. The void created in the center holds gas drawn in through the inlet port of the compressor. As the gas travels around the pocket of air in the center, it is compressed. This compressed air is then fed back out through the discharge port.

The benefits of a Liquid ring compressor include: 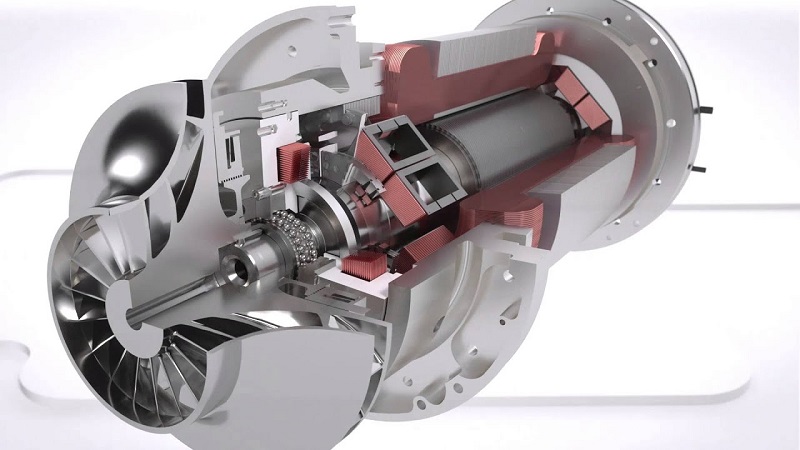 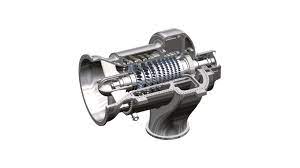 An axial-flow compressor is one in which the flow enters the compressor in an axial direction and exits from the gas turbine also in an axial direction. An axial-flow compressor compresses its working fluid by first accelerating the fluid and then diffusing it to obtain a pressure increase. The fluid is accelerated by a row of rotating airfoils (the rotor) and diffused by a row of stationary blades (the stator). The diffusion in the stator converts the velocity increase gained in the rotor to a pressure increase.

These compressors are typically driven by an electric motor or a steam or a gas turbine.

Axial-flow compressors produce a continuous flow of compressed gas and have the benefits of high efficiency and large mass flow rate, particularly concerning their size and cross-section. They do, however, require several rows of airfoils to achieve a large pressure rise, making them complex and expensive relative to other designs such as centrifugal compressors. 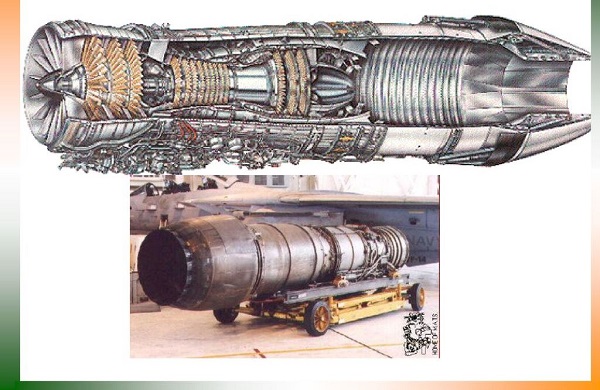 A mixed-flow compressor refers to a type of compressor that combines axial and radial flow paths. In this type of dynamic compressor, the exit mean radius is greater at the inlet, like a centrifugal design, but the flow tends to exit in an axial rather than radial direction. This eliminates the need for a relatively large diameter exit diffuser associated with centrifugal compressors. The impeller can be machined from solid using NC machines, in much the same way as that of a centrifugal design.

So, this is everything you need to know about different types of compressors. If you enjoy this article in Linquip, let us know what you think by leaving a reply in the comment section. We will be more than glad to have your viewpoint on the article. Is there any question we can help you through? Feel free to sign up on our website where our experts are prepared to provide you with the most professional advice.

The 10 Best Air Compressor for Home Garage in 2021