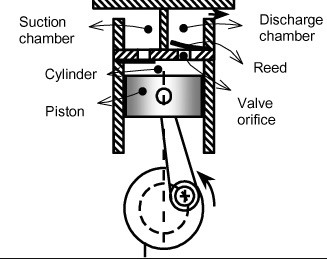 As stated earlier, reciprocating compressors are found in almost every work setting including but not limited to diving, dental surgeries, automotive workshops, and agriculture. Pneumatic (air-powered) tools, such as drills and angle-grinders, are important in industry because they are generally lighter and safer than those with an electric motor which further highlights the significance of reciprocating compressors

Reciprocating compressors are considered the most energy-efficient type of all compressors for most applications. This is while they tend to have a higher maintenance requirement than compared to other compressor types.

The primary components of a typical reciprocating compressor system can be seen in Figure 1 and it includes a cylinder, two chambers for suction and discharge, a piston, orifice and reed.

Simply put, a piston moves in a reciprocating manner to compress the gas. This may be of single-or dual-acting design.

Some dual-acting cylinders in high-pressure applications will have a piston rod on both sides of the piston to provide equal surface area and balance loads.

Gas pressure is sealed and wear of expensive components is minimized through the use of disposable piston rings.

Process gas is drawn into the cylinder, compressed, contained and then released by mechanical valves that typically operate automatically by difference in pressure. Depending on system design, cylinders may have one or multiple suction and discharge valves.

The crankshaft is fitted with counterweights to balance dynamic forces created by the movement of the heavy pistons.

Suction gases are generally passed through suction strainers and separators to remove entrained particulates, moisture and liquid phase process fluid that could cause severe damage to the compressor valves and other critical components, and even threaten cylinder integrity

Typically, reciprocating compressors are relatively low-speed devices, and are direct- or belt-driven by an electric motor, either with or without a variable speed drive controller.

Often the motor is manufactured to be integral to the compressor, and the motor shaft and compressor crankshaft are one-piece, eliminating the need for a coupling. Gearbox-type speed reducers are used in various installations.

Sometimes, though less commonly, they are driven by steam turbines or other sources of power such as natural gas or diesel engines. The overall design of the system and the type of driver selected will influence lubrication of these peripheral systems. 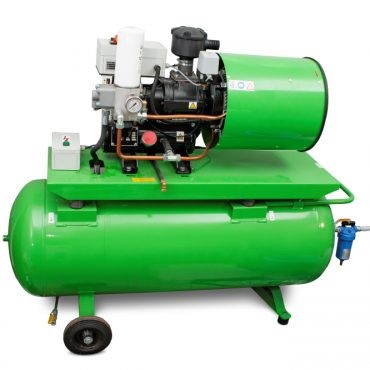 This is the most typical air compressor in the market.  They tend to be quite loud but can be relatively powerful for their size and weight.  Given their portability, they can be placed close to point of use so if your needs are limited you can avoid installation of large amounts of piping and their simple design makes maintenance easier.  As a rule they have a higher cost of compression than their double-acting siblings so they work best in environments where constant compressor use is not required. 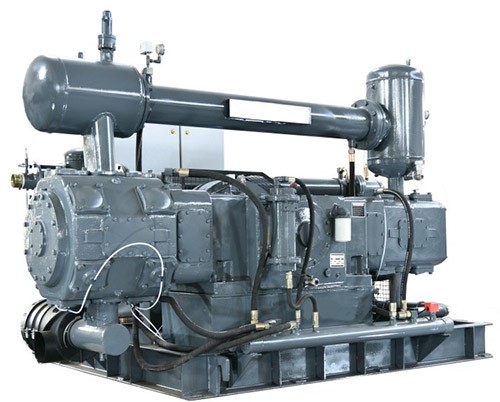 A double-acting reciprocating air compressor uses both sides of the piston to compress air. The result is a more efficient compression than the single-acting counterpart.  Such compressors are likely to be used in industrial settings.  They also have a rather simple maintenance routine.  Potential problems include high up-front cost, huge space requirements, and strong vibrations which means special mountings necessary.