Water pumps are in use all around us. They can pump water from a well into our home or circulate the water in our central heating system and perform many other fluid moving tasks. One of the most misunderstood physical characteristics of a pump is the concept of the head. It’s a concept that is incredibly simple to define but can be confusing when the concept is translated into examples involving real pumps.

The highest height at which a pump can convey fluid against gravity is called the head. If you have a vertical pipe running straight up from the discharge exit, this is the clearest example. Fluid will be pumped up the pipe 5 meters from the discharge exit by a pump with a 5-meter head. A pump is an important Product of employing Industrial Tools. Pumps are provided by several Suppliers and Companies, different manufacturers, and a lot of distributors and there are a lot of pumps for sale on Linquip.

A full list of pump head services is available on the Linquip website, which covers all OEM fleets. Linquip vendors can assist you with this. Please contact Linquip’s Pump Experts to learn more about how to connect with a wide choice of Service Providers who consistently deliver the highest quality products.

This article will define the term “head” as it relates to pumps, so you should never have to worry again about what is head of a pump? or why it’s important. Follow this new bog in Linquip to find out.

⇒ View a List of Pump for Sale and Their Suppliers ⇐

what is head of a pump?

The pump head or discharge head of a water pump is a measure of the power of a pump. The greater the pump head, the greater the pressure that the pump can generate. This statistic is measured in meters (or feet) and is calculated by placing a tube on a pump’s discharge and measuring the maximum height to which it can pump water.

Simply stated, a pump’s head is the maximum height that the pump can achieve pumping against gravity. Intuitively, if a pump can produce more pressure, it can pump water higher and produce a higher head. The purest example of this is if you have a vertical pipe extending straight up from the discharge outlet. A pump with 5m of the head will pump fluid up the pipe 5m from the discharge outlet.

The imaginary vertical discharge pipe used to measure the head is shown in the figure below. 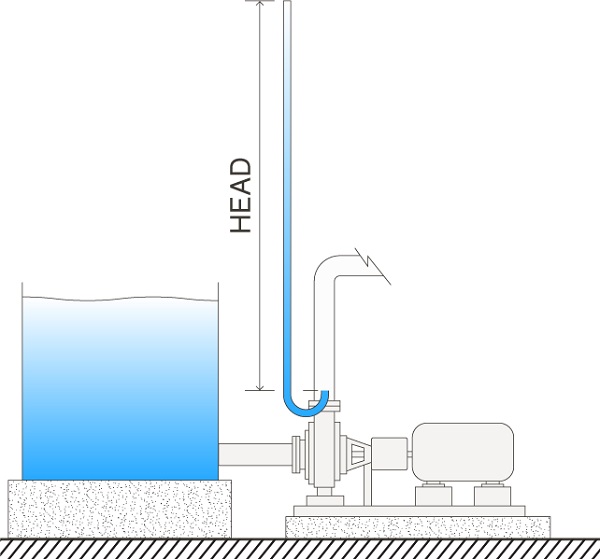 Sometimes the head can be confused with pressure during pump choice. There is a strict relation between them which is defined by the fluid specific gravity, so the relation is fluid dependent. So what is the difference between pressure and head?

As mentioned above, Head is the height given by the pump to the fluid and it is measured in meters of liquid column [m.l.c.] or simply indicated in meters [m]. The given head is fluid independent, meaning different fluids with different specific gravities are all lifted at the same height. Pressure, instead, is fluid dependent and is affected by the liquid density. The force of a fixed height liquid column over a unitary area will change with different specific gravities. So in this case the same head generates different pressures.

The pump head calculation is not done directly. Manometers on the pump suction and delivery line give the measure of the pressure. Measurements given by manometers indicate differential pressures imposed by the pump between suction and discharge. These measures are read in [bar] [atm] [psi] [ft H2O] etc. Specific gravity γ has to be considered to evaluate the correspondent head.

A much more useful measure of the head is the difference between the liquid level in the suction tank and the head in the vertical discharge pipe. This number is known as the “total head” that the pump can produce.

Mathematically speaking, the total head formula is as follows.

These are two equal but opposite forces that affect the flow of water pumps. As mentioned above, Total Head = Pump Head – Suction Head.

If the water level is higher than the pump, then the suction head is negative and the pump head will increase. This is because the water entering the pump applies additional pressure at the suction.

Conversely, if the pump is located above the water to be pumped, then the suction head is positive and the pump head will decrease. This is because the pump must use energy to bring the water to the level of the pump.

At the maximum pump head, the flow of a water pump system is zero. This is because the pump cannot generate any pressure to move water since all of the power is being used to lift the water that is already in the system.

When the pump head is zero, the water flows at the maximum rate. The result of zero pump head is that the pump’s energy can be entirely applied to moving water, rather than lifting it, so flow is faster.

As pump head increases, flow decreases, and vice versa. This relationship creates a unique graph of an individual pump’s operating field that can be used to select the correct water pump for any job.

Of course, when the flow is introduced into a pump system, friction must be taken into account. The force of friction between the water and the sides of the pipe further reduces the flow rate.

When considering a flowing water pump system, Total Head = (Pump Head – Suction Head) + Friction. We are not going to discuss pipe friction here in any detail but it is important to know that if you are going to pump across a long-distance as well as up you are going to affect the overall pump head. The roughness of the pipe surface and sharp bends in the pipework will have significant effects on the pump head.

So, now that you know the answer to the question ‘what is head of a pump?’, let us know what you think by leaving a reply in the comment section. We will be glad to have your viewpoint on the article. Is there any question we can help you through? Feel free to sign up on Linquip to get the most professional advice from our experts.

12 thoughts on “What is Head of a Pump? A Complete Guide”