Generator vs Inverter, do you really know what the differences are and which one in your desired application should be employed? Here we are going to describe the Generator Vs Inverter topic.

A generator produces electrical power, while an inverter converts one type of electrical current to another. This is the crucial consideration for Generator vs Inverter topic. There are two distinct types of electrical current, alternating (AC) and direct (DC). Inverters are applied when devices that utilize AC power require to be used in a car or other place where only DC power is available. Although there are inverter generators that do both for greater energy efficiency, the two machines have clearly different functions.

What is the Difference Between AC and DC Current?

Alternating current and direct current vary in that electrons flow back and forth in AC, but solely in one direction in DC. Because AC can stand higher voltages, it loses less energy when it progresses long distances. As a result, AC is typically utilized to supply power to most houses and buildings. Therefore, most home appliances run on AC; oppositely, they’d need to convert the AC power provided to the building or home to DC to power the device. Personal computers generally run on DC and include a rectifier to perform this conversion. In this case, the rectifier is more regularly referred to as a power supply.

How an Inverter Works?

An inverter takes the existing power that arrives in the form of direct current and transforms it into alternating current. It accomplishes this by sending the current within switches that send it in various directions. Filters may then be employed to smooth out the wave and give it a solid frequency.

Power inverters are amazingly prevalent today because of their size and efficiency to some extent. Distinct types of inverters use various filtering methods, depending on how smooth the output requires to be. To convert AC power into DC, a device named a rectifier is employed.

One of the most popular everyday usages of inverters is to produce power to run different electronics in automobiles. Cars normally produce DC, which is not harmonious with most devices meant to use regular household outlets. Most recent cars have an accessory port that a compact inverter can be plugged into, enabling a cell phone, small TV, or other electronic devices to use the power. Some tiny inverters are intended to be plugged into the cigarette lighter of a car.

Larger inverters are employed on construction sites to give electricity for power tools and other devices. Solar and wind energy generators utilize inverters to transform the power they produce into that which can be applied in a home.

An essential difference between an inverter and a generator, named as generator vs Inverter, is that an inverter can only operate if there is previously a source of electrical energy; it cannot produce its own. Unless part of a combination machine, inverters solely convert DC to AC, while a traditional generator cannot change the current from one form to another.

Watch this cool video to understand how an inverter works.

How a Generator Works?

A generator is a device that transforms mechanical energy into electricity. In most cases, electric generators are capable of providing the energy a home take. Large-scale electrical generators may be powered by natural gas, coal, or nuclear energy. A portable generator regularly employs gasoline or diesel fuel, burning to generate electricity for use on a construction place or building throughout a power outage.

Generators can be devised to produce either AC or DC electricity, although most used in power stations and smaller applications produce AC. This is all that traditional generators do, though they generate electricity. If the voltage that electricity necessitates to be exchanged, for example, a transformer must be employed.

Watch this excellent video to see how a generator works.

Inverter generators are similar to conventional generators because they generate AC power, which is then transformed to DC power before being transformed back to AC. This provides a smoother, more constant flow of power. The conversion also enables the generator to be more fuel-efficient, as well as perform more quietly than regular models.

Some bodies also confuse an inverter with a power converter, even applying the terms conversely. A converter is applied to change the voltage from one level to another. Various voltage levels are used in diverse countries, and travelers to other parts of the world may require a converter to use appliances like electric shavers and hairdryers.

After mentioned descriptions about generators and inverters, it’s time to talk about Generator Vs Inverter. There are too many things to examine if you intend to get the best power backup to assist you the most. Here we have categorized the main differences between generator vs Inverter that can help you determine which one to go with:

Basics of Generator Vs Inverter

A generator is an electrical machine that acts as an urgent power source for heavy power services or home supply. A generator is fundamentally a device that uses mechanical energy from external sources and transforms them into electrical energy. It is primarily employed for electrical power distribution throughout the power shutdown.

Conversely, an inverter is an electronic device utilized to transform direct current from sources like solar panels, batteries, or fuel cells to alternating current. It’s a portable device that joins to a battery or a set of batteries, which in fact attach to the device to power regular household appliances.

Power Sources of Generator Vs Inverter

In a generator, the engine is the primary source of mechanical energy, which normally operates on propane fuel or gasoline. In contrast, the larger engines for industrial applications employ natural gas, diesel, or propane as a fuel source. Gasoline is one of the most typical choices of fuel, which improves the portability of small-sized generators.

On the other hand, an inverter transforms stored power into a standard current. A grid-connected inverter converts power from solar panels and wind turbines into AC main power since AC is more adapted for long-distance transmission.

The Capacity of Generator Vs Inverter

Generators are bulky electrical devices able to withstand heavy loads and are available in great capacities. They are instrumental in places with long power cuts and are more sophisticated to extreme power spikes. It holds on running if the power surge is slight. Nevertheless, it needs some time and effort to kickstart a generator.

Inverters are moderate capacity devices that are ideal for household use with fewer power surges. It comes with auto-shut features that shut the power off in case of sudden power spikes to stop damage to the unit. Besides, inverters commence automatically once the power is gone.

The Maintenance of Generator Vs Inverter

Most engine-powered generators utilize gasoline or diesel, which needs periodic maintenance, such as oil change, distilled water change, change of lubricant oil, and so on. Gasoline and diesel have a slight shelf life of 12 to 24 months with decent maintenance. Furthermore, gasoline cannot be deposited in large quantities for more than a few months, except you use a fuel stabilizing chemical. Also, generators produce more noise.

On the other hand, inverters need less or no maintenance since it incorporates plain circuitry to change DC to AC with no complexity.

Here we propose a summarized table indicating the main Generator vs Inverter differences: 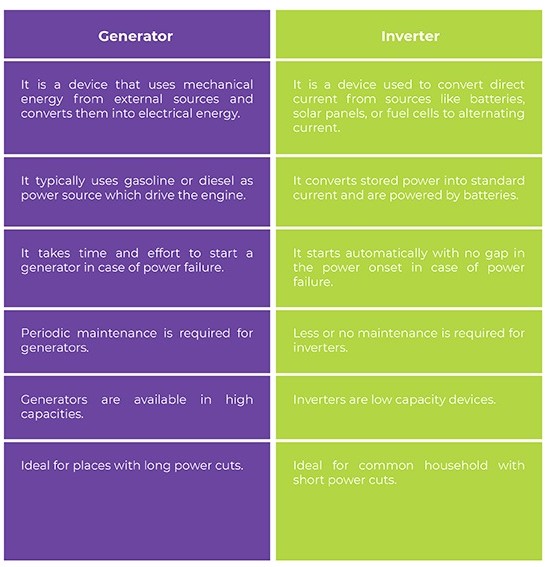 Although generators and inverters are the two most popular technologies employed in the power generation industry to reduce energy deregulation, they vary significantly in their function and capacity.

Inverters are low-power accessories that draw power from a fixed DC source and employ a microprocessor to convert DC power into AC power. Inverters can be applied to power all modern household appliances such as television, lights, refrigerators, etc. Generators regularly run on diesel, gasoline, propane.

Difference between Capacitor and Inductor- Capacitor vs. Inductor

Here we want to discuss the difference between active and passive filters. First, let us take a look at the definition of the filter. The...

What is the Difference Between Potentiometer and Rheostat?

We want to talk about the difference between active and passive components. A critical factor that distinguishes types of electronic components from each other...