The Simple Guide to Motor Efficiency: What It is and What to Do

Motors are used when there is a need to move something, and motor efficiency identifies how cost efficient that movement is. Motors usually produce some rotational motion that is transferred to the end compartment which uses that motion. Some of the power generated by motors gets lost on the way due to factors such as friction or heat loss; therefore, motor efficiency is the ratio of the energy actually used to the energy put into a mechanical system. It is clear that a more efficient motor could guarantee lower operational costs, which is what every motor user is looking for.

Since we are committed here at Linquip to provide our customers with the easiest ways of finding their desired equipment, not only we have established a platform for you to find the motor you need here, but also we have tried to explain in this post how you could make a more insightful decision about which motor might be a better choice for your application.

Before continuing further with the motor efficiency and its estimation, let us first see some important terminology:

Work is the amount of energy that could be used to move a mass through a distance by applying some force.

Power is the amount of work done per unit time.

A measure of how much of the input energy to the system can be turned into the output energy or work.

The maximum load a machine can deliver where its efficiency would still be high enough.

The maximum load a machine can deliver.

The ratio of the real power to the apparent power in a circuit.

The moving part of the electric motor which rotates the shaft to produce mechanical energy.

The stationary part of the motor that has some windings or a fixed magnet with a core made of different sheets of metals or lamination. 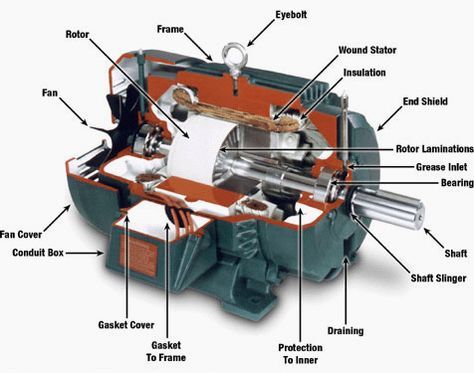 Read More On Linquip
What is the Principle of Electric Motor: The Concise Answer

The electrical efficiency is due to losses which are known as copper (denoted by Cu on the periodic table) losses. What remains after the Cu losses is the ‘developed power’ in the armature. This developed power will also undergo some losses known as friction and iron losses. The final power is the output or mechanical power delivered at motor shaft, letting us now to calculate the mechanical efficiency of the motor.

Now, when you want to calculate motor efficiency, you will most likely know about your motor rated power output hp (horsepower), its load (the current output power as a percentage of its rated output power), and the input power in KW. Therefore, the formula for motor efficiency would be:

The number 0.7457 is a correction factor to convert hp to KW.

In addition to the above formula, there is another approach to calculating motor efficiency. Instead of load and its input power, you might have other measurements such as the current, voltage, motor torque and RPM. With these parameters you can calculate motor efficiency as follows:

So, if you have a motor with 80% efficiency, you could only use that much of the input power, and 20% of your input energy would be lost through heat dissipation, which is evident in the temperature rise of the equipment.

Now, we always hear that we should look for more efficient systems. While that is true, we need to appreciate the fact that ‘energy efficiency’ does not necessarily correspond to ‘cost efficiency’. To elaborate on this regarding motors, you might use the motor in places where the operating time of the motor is low or the electricity is not expensive. Considering the fact that more efficient equipment are generally more expensive than their less efficient counterparts, you might not be able to tradeoff the higher initial cost with your operational cost savings any time soon, which might present your purchase as a mistake from a financial point of view.

Nonetheless, the power costs and operating time is high for most applications, making efficient motors the better choice both technically and financially. National Electrical Manufacturers Association (NEMA) has introduced a design and labeling protocol for three phase motors, which have considerably higher efficiencies than single phase motors, categorizing them in A, B, C, and D design types. Almost 90% of induction motors used in the market for general purposes are of the design B type. Now, let us see an example of how efficient a standard B design motor operates against an energy-efficient one in average.

Now, imagine you want to make up your mind about purchasing a motor. Take the example of 10 hp motor with an efficiency of 85%. The following table shows how fast more efficient motors despite being more expensive will eventually offset the initial cost of purchasing an energy-efficient motor.

These two tables were adopted from NEMA Publication MG-1.

Read More On Linquip
Everything About Switched Reluctance Motor

Motor Efficiency and Its Classes

This classification is intended for single and three phase electric motors with 2, 4, 6, and 8 poles with rated output ranges of 0.12KW to 1MW, rated voltage of up to 1 kV, frequency of 50Hz to 60Hz. 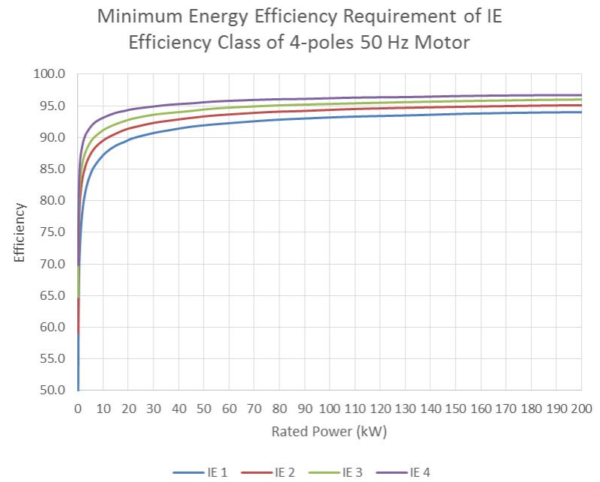 Every system has losses that lead them to deliver less output than their input. This is why we deal with system efficiency one of which being the motor efficiency. There are different reasons behind such losses in motors such as friction, dissipation of magnetic energy in electric motors, resistance losses, etc. It is clear that lowering motor losses will enhance the motor efficiency.

One thing to keep in mind is to continuously have your motor monitored. This means as well to keep a record of your motor(s)’s age, the output power provided as well as the rating of the motor(s), which can be used to calculate the motor efficiency over time. In addition, you need to keep an eye on the voltage unbalance, current unbalance, and power factor (PF). It is clear that you want a PF close to 100%.

Some of the methods that could be employed for improving motor efficiency include the following:

What is motor efficiency?

A measure of the fraction of input energy to the motor that will actually be turned into the output work.

Why is motor efficiency so important?

To lower operational and maintenance costs of the system. To know more about this, watch here.

What is the acceptable range of motor speed?

Motors are usually designed to work at 50% to 100% of their rated RPM.

At what speed would the motor operate at its highest efficiency?

Motor efficiency is usually at its maximum value around 75% to 80% of the rated speed.

Is there a difference between power factor and efficiency?

Do I need to calculate the motor efficiency myself?

No, there are efficiency calculator software packages out there, which might also be supplied by the motor vendor.

What is the Principle of Electric Motor: The Concise Answer

Differences Between Motor and Engine

Differences Between Motor and Generator

The Construction of Synchronous Motor: All the Necessary Details You want to Read About