The topic of renewable energy is an evergreen subject, especially, in a world dominated by fossil fuels. Renewable energy is widely talked about in the contemporary world because it is unlimited, which means it’s sustainable and does not emit greenhouse gasses that are detrimental to the environment and human health.

A classic example of renewable energy is wave energy. Wave energy can be considered a large and mostly untapped reservoir. Harnessing the power of waves breaking on the shore, or that of the phenomenal mass displacement of the gulf stream could potentially bring a significant amount of renewable energy in mankind’s portfolio. In this article, we will discuss the wave energy diagram. Read this new blog in Linquip to find out more.

What is wave energy?

Wave power is the capture of energy of wind waves to do useful work; for example, electricity generation, water desalination, or pumping water. A machine that exploits wave power is a wave energy converter (WEC).

The wave energy formula is:

There are many types of technology used to convert wave energy into electricity. One of these methods is Oscillating bodies that use floating buoys or platforms rising and falling with the swell. They are fixed to the seafloor via a hydraulic pump. The buoy moves up and down along ocean swell crests and troughs, activating the hydraulic pump which pushes water or air through a turbine, which in turn rotates a generator to produce electricity.
Below is a diagram of how wave energy is used to generate electricity.

The diagram of wave energy devices

As mentioned above, many types of wave energy devices were designed and are currently being used to extract electrical energy from wave energy. In this part, we will explain the working principle of some of the main types with their diagrams.

The pitching and heaving of the waves cause a relative motion between an absorber and reaction point. The left-hand wave energy device shown in the figure below uses a heavy ballast plate suspended below the floating buoy. The buoy is prevented from floating away by a mooring line attached to a sea-floor anchor. This mooring line allows the point absorber to operate offshore in deeper waters.

As the buoy bobs up-and-down in the waves, an oscillatory mutual force reaction is generated between the freely moving absorber and the heavy plate causing a hydraulic pump in between to rotate a generator producing electricity. The middle wave energy device operates in a similar manner to the previous floating buoy device. The difference this time is that the freely heaving buoy reacts against a fixed reaction point such as a fixed dead-weight on the ocean floor. As this type of point absorber is bottom-mounted, it is operated in shallower nearshore locations.

The third device is an example of a linear absorber (wave attenuator) that floats on the surface of the water. It is tethered to the ocean floor so that it can swing perpendicularly towards the incoming waves. As the waves pass along the length of this snake-like wave energy device, they cause the long cylindrical body to sag downwards into the troughs of the waves and arch upwards when the crest of the wave is passing.

Below is shown the diagram of the point absorber.

As the incident waves outside enter and exit the chamber, changes in wave movement on the opening cause the water level within the enclosure to oscillate up and down acting like a giant piston on the air above the surface of the water, pushing it back and forth. This air is compressed and decompressed by this movement every cycle. The air is channeled through a wind turbine generator to produce electricity as shown.

The type of wind turbine generator used in an oscillating water column design is the critical element to its conversion efficiency. The air inside the chamber is continually reversing direction with every up-and-down movement of the seawater producing a sucking and blowing effect through the turbine. If a conventional turbine were used to drive the attached generator, this too would continuously be changing direction in unison with the airflow. To overcome this problem the type of wind turbine used in oscillating water column schemes is called a Wells Turbine.

The Wells turbine has the remarkable property of rotating in the same direction regardless of the direction of airflow in the column. The kinetic energy is extracted from the reversing airflow by the Wells turbine and is used to drive an electrical induction generator. The speed of the airflow through the wells turbine can be enhanced by making the cross-sectional area of the wave turbine duct much less than that of the sea column.

The wave energy diagram of the Oscillation water column is illustrated in the figure below.

The basic impoundment structure can be either fixed or a floating structure tethered to the sea bed. The wave overtopping device uses a ramp design on the device to elevate part of the incoming waves above their natural height.

As the waves hit the structure they flow up a ramp and over the top (hence the name “overtopping”), into a raised water impoundment reservoir on the device in order to fill it. Once captured, the potential energy of the trapped water in the reservoir is extracted using gravity as the water returns to the sea via a low-head Kaplan turbine generator located at the bottom of the wave capture device.

Other such wave capture devices are located at the shoreline where the waves are channeled along a horizontal man-made channel. This channel is funnel-shaped which is wide towards the sea where the waves enter and gradually narrows towards an impoundment reservoir at the other end. As the waves propagate along the narrowing channel, the wave height is lifted due to the funneling effect to a level exceeding the horizontal upper edge of the channel wall, excess water from the wave is allowed to spill into a confined basin above the normal sea level.

As the water is now at a height above the sea level, the potential energy of the water trapped in the basin is then extracted by draining the water back to the sea through a low-head Kaplan turbine as before.

The diagram of the overtopping device is shown below. 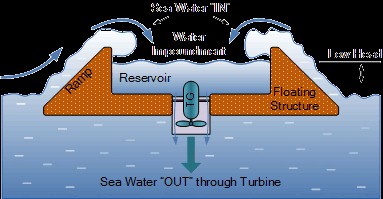 So, now you know everything you need to know about the wave energy diagram. If you enjoy this article in Linquip, let us know what you think by leaving a reply in the comment section. We will be more than glad to have your viewpoint on the article. Is there any question we can help you through? Feel free to sign up on our website where our experts are prepared to provide you with the most professional advice.