Alternator construction enabled us to use our fancy cars without having to worry about running out on electricity quickly.

Alternators are types of electrical Generator (AC generator) and are considered as electrical machines for converting mechanical energy into electrical energy. This energy would be in the form of alternating current (AC). They are also called Synchronous Generators.

Different Types of Alternator Based on Design

Alternator construction enables two types of alternator to be designed:

This design contains more poles and as a result its rotor diameter is large. Plus, the axial length is smaller in Salient Pole type. This type of alternator has low-speed prime movers such as hydraulic turbines. You can use this design when you need low and medium speed applications like that of hydropower stations or diesel power stations. It is worth mentioning that the Salient Pole rotor can cause excessive windage loss when driven at high speed and its construction is not suitable for high mechanical stress. 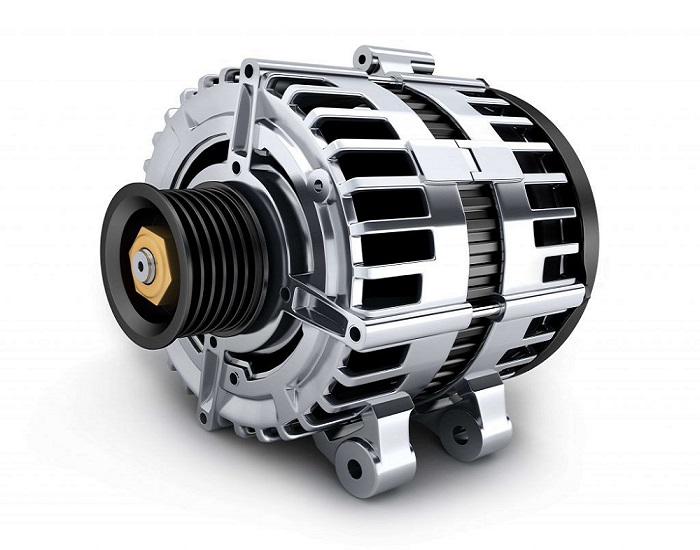 Inside each alternator, you’ll see Pole Core, Rotor, Stator, Air Gap, bearings, fan, slip rings, armature, and Yoke. But they have two major parts: Rotor and Stator. Different parts of the alternator are responsible for a specific purpose toward the end goal of the alternator.

The Yoke is the outer part of the alternator that works like a protector to protect the machine. Plus, it provides mechanical support to the machine as well. The environmental conditions might affect the way internal parts work, therefore, the machine needs a Yoke to protect these inner parts from any damage.

Alternator Stator, as the name suggests, is stable and never rotates. In the alternator construction of the stator, the armature winding is wound in this stationary part. It is made from an iron ring laminated by silicon steel with slots. The special magnetic material used in stator allows high magnetic permeability as well as low magnetic hysteresis. The core of the stator is laminated which minimizes the effect of eddy current losses. A thin coating of an oxide enables the passing of cool airflow.

Bearings can also help to perform a smoother operation. And finally, the fan helps the exhaustion of the heat generated during the running conditions.

Alternator rotor rotates within the stator (armature conductor). This rotor in a synchronous generator carries a field winding supplied by the DC source (also known as exciter).

How does an alternator work?

Alternators work similarly to AC generators. The alternator construction has been designed in a way that it works based on Faraday’s law of electromagnetic induction since it rotates in the magnetic flux. The working principle of the AC generators and alternators are as follows:

A series of coils that are placed in the magnetic field is called armature winding. The coil rotates in the magnetic field with the help of a prime mover. This movement results in cutting the magnetic lines of forces. The process then generates an induced emf which works based on the principle of faradays law of electromagnetic induction. The developed current from the induced emf then flows in the armature winding. For finding the direction of the armature current, you should use the Flemings right-hand rule.

The induced emf maximizes when the coil is perpendicular and will be zero when it is in alignment with the magnets. With the rotation of the coil, the current constantly changes. Then the current passes through the slip rings and enters the brushes. The slip rings are used to smooth the process and the brushes collect the produced current from the slip rings. These brushes are responsible to deliver the current to the load.

What is the difference between an Alternator and a Generator?

Where do we use an Alternator?

Alternators are generally used in automobiles. What they do is that when the engine is on, they charge the battery to provide electricity for electrical purposes such as supplying the need for lights, and so on.

Now that you know the alternator construction and how it works, how about sharing your comments with us and talk about your experience as a user of such machines? Need to talk to an expert regarding your alternator? Sign up on Linquip and we’ll get in touch with you in the blink of an eye to help you solve all your problems.