Difference between AC and DC generators: An easy to understand guide

What is an AC generator?

AC generator is considered an electrical generator for converting mechanical energy into electrical energy. This energy is in the form of alternating current or alternative EMF. They work according to the principles of electromagnetic induction which states that electromotive force (EMF) is generated in a current-carrying conductor that cuts a uniform magnetic field. This can either be achieved by rotating a conducting coil in a static magnetic field, or by rotating the magnetic field that contains the stationary conductor. The preferred arrangement is to keep the coil stationary because it is easier to draw induced alternating current from a stationary armature coil than a rotating coil.

What is a DC generator?

DC generators convert mechanical energy into DC electricity which is short for Direct Current. DC generators work according to the principles of energetically induced electromotive force.

Now, let’s dig deeper into the difference between AC and DC generators and learn about their use. Then, you’ll be able to decide which one suits your needs: 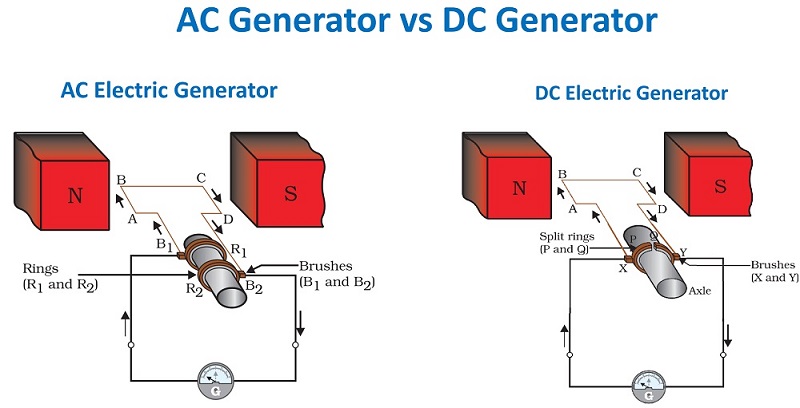 AC vs. DC: The Design and Mechanism

The Diff BW AC and DC Generator in terms of design is that the AC generators’ current moves through the fixed coil. The flow of current remains in the opposite direction, with the help of a moving magnet. While in DC generators the coil moves in a fixed field and the current flow with this movement, so no fixed coils for DC generators.

One of the similarities between AC and DC generators is that they both have slip rings (created from metal) and also an armature coil. The armature connects to the outside circuit with the help of a connection that directly affects the type of the produced current.

The 180-degree rotation between magnetic poles by the armature then takes the current from its highest point to zero. The rings in an AC generator don’t have commutators while DC generators have Split-ring commutators. Plus, the smooth and uninterrupted surface of the AC slip-rings is highly efficient and does not wear quickly while both brushes of a DC generator are less efficient than AC generator since they wear out quickly. The efficiency of the brushes in the AC generator decreases the short circuit possibility but the possibility is high in DC generators.

The difference between AC and DC generators: Use and Maintenance

Read More on Linquip
Alternator vs Generator: Your go-to guide to learn their difference

Another difference between AC and DC generators is their connectivity. DC generators have a design that provides seamless connectivity with efficient power flow. This is mostly because they don’t need any transfer switch. In the case of AC generators, however, they require much more effort to transfer electricity to remote sections of the grid, making it less efficient when it comes to connectivity.

AC and DC generators have different types for different uses and needs. Some of them are as follows:

Which one is better: AC generator or DC generator?

Finding the best one between AC generator vs Dc generator largely depends on the way you want to use it and your desired outcome. Each of them has several advantages enabling you to get the most out of them, such as:

So, now you know everything you needed to know about the difference between these two! Do you think the difference between AC and DC generator affects other aspects of your life or the industry other than what we mentioned above? Share your thoughts with us in the comment section. And feel free to sign up on our website if you want our experts to answer your most complicated questions regarding this field.