The electronic expansion valve is a device that is used to control the refrigerant flow into the evaporator in precise amounts. Therefore, they can be found in air conditioners, heat pumps, and other equipment that follow the refrigeration cycle.

You can find what you are looking for regarding your HVAC requirements here at Linquip, and we encourage you to read along to get to know an important component of your cooling system.

The role of expansion valves

An expansion valve is a flow regulator that is intended to decrease the pressure of the fluid reaching to it by partially vaporizing it, which leads to lowering the temperature of the refrigerant in the case of cooling systems due to increase of heat transfer surface area. Not only does it regulate the fluid temperature, but also it regulates the flow rate to entering the evaporator.

Refrigerant flow rate regulation is a sensitive task. If the refrigerant flow is too little, then evaporation would take place at a fast pace, leading to a consequent rise of temperature due to further heat transfer. This means that  the evaporator efficiency would decrease as a result of refrigerant warm-up and overheating. Moreover, excessive refrigerant transmission leads to insufficient evaporation, which could damage the compressor.

It is, therefore, desired to avoid any excessive refrigerant flow passage and adjust the amount of the fluid transferred to the evaporator by monitoring the level of overheating. 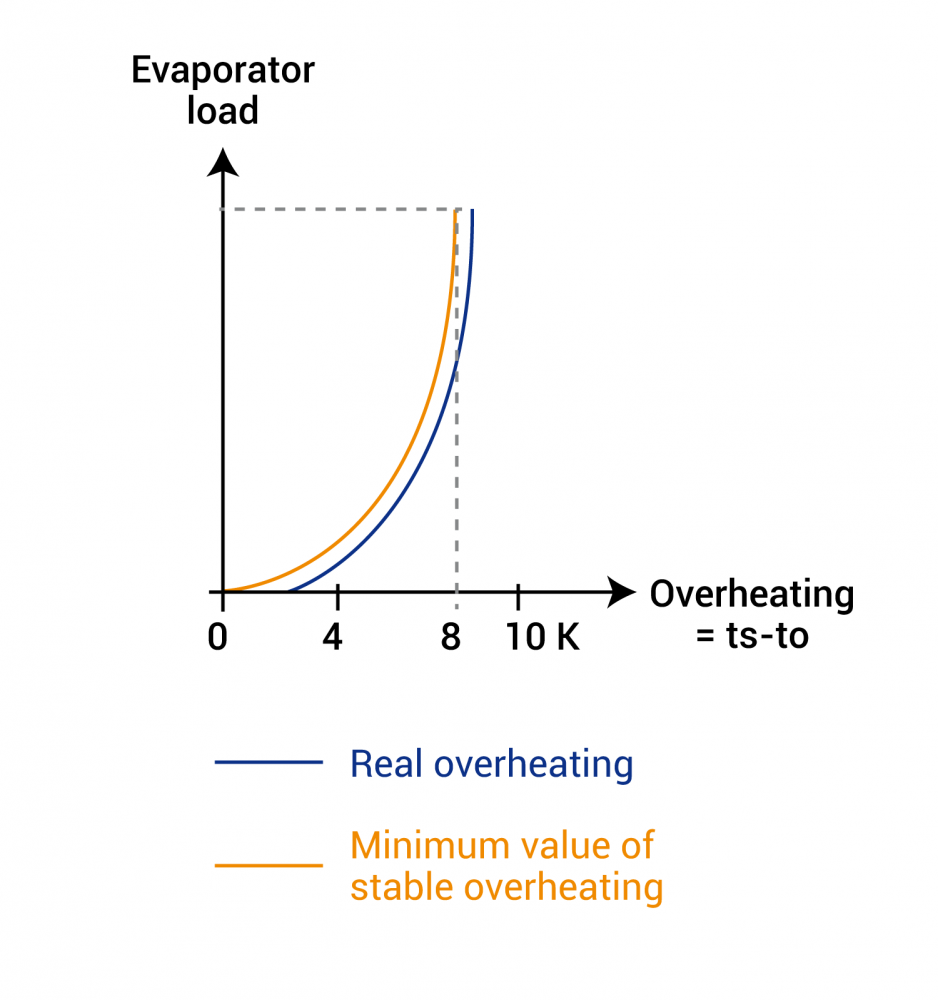 Read More on Linquip
Types of Expansion Valves: an Easy to Understand Guide

Advantages of the electronic expansion valve

Despite the fact that an EEV costs more than a TXV, it has many benefits that could make it the better solution for your needs. To begin with, the electronic expansion valve is highly reliable, quickly installed, and can be integrated with a centralized controlling unit to automate and optimize the control of the refrigerant throughout the entire refrigeration circuit. Moreover, it is quite flexible in terms of the refrigerant type.

In addition to the aforementioned, it can deliver a good performance at low condensing pressures where the pressure difference across the evaporator is very low due to better overheating control. Now, the strength of the electronic expansion valve here is that it maintains the compressor’s performance at similar levels, no matter how much the evaporator load is. It would more precisely control the amount of evaporation and save energy consumption as much as 15%.

Main parts of an EEV

Although there are different designs for an electronic expansion valve, the general design would include a permanent magnet and a copper coil inside the stepper motor body, placed at the top, by which an electromagnetic field is generated. The stepper motor is coupled with a shaft that is connected to a thread. When energized, the shaft pushes the thread and then the needle onto the valve seat, and this is how an electronic expansion valve controls the refrigerant flow rate. 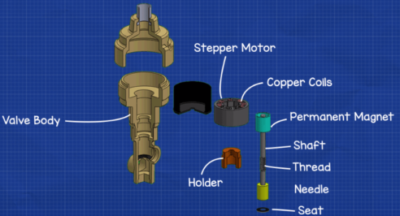 Image from The Engineering Mindset

Principle of operation for an EEV

A refrigeration system comprises of different parts that make the cycle. These parts include the evaporator, compressor, condenser, and the expansion valve.

What happens in the evaporator is that it transfers the heat from the conditioned environment to the low temperature, gas-liquid-mix refrigerant, evaporating it in a process that lowers its pressure.

The low-pressure, low-temperature evaporated refrigerant is then taken to the compressor, in which the gas pressure and temperature rise to high levels, and it turns into a super-heated vapor.

The condenser receives this super-heated refrigerant and rejects its heat to the atmosphere during a condensation process. During this process, the pressure of the condensed refrigerant would remain high, but its temperature falls to medium levels.

The saturated refrigerant then reaches the EEV, which would partially be evaporated based on the evaporator demand in a process that lowers the pressure and temperature of the refrigerant to low levels.

As was mentioned earlier and also the figure above, a controlling unit would constantly measure the pressure and temperature of the superheated vapor as well as the temperature of the refrigerant at the expansion valve in order to produce the right amount of evaporator demand signal.

The way that the measured pressure will help with this demand signal sent to the electronic expansion valve is that its corresponding saturated temperature is calculated at the controller unit based on thermodynamic tables, which is then compared against the measured temperature. It enables the control to decide on how much refrigerant to pass the electronic expansion valve. The signal will then be transmitted to the stepper motor, energizing the coils accordingly, enabling flow control by pushing down or pulling up the needle on the valve seat.

The adjustment of downwards or upwards motion of the needle is handled by the rotation of the permanent magnet due to the polarity of the magnetic field in the coil. As the magnet is rotated by fractions of a revolution, the shaft would also rotate accordingly. Based on the direction of shaft rotation, the threaded assembly would pushe down or pulls up the needle.

Read More on Linquip
Industrial Valves A Comprehensive Review on Parts, Types and its Usability

The electronic expansion valve is the proper solution when the performance of the cooling system is a priority, and you are looking for saving operational costs. However, you need to consider the fact that refrigerant bleeding from the electronic expansion valves to the condenser could be the case for some of EEVs. This means that excessive refrigerant would enter the condenser leading to some liquid remaining in the stream entering the compressor that could damage it. In such cases, you need to place a solenoid valve prior to the EEV.

More on the electronic expansion valve

To learn more about how an EEV works, you can watch the video here.

When debris, such as scale, rust and other matters mix with water, oil, gas, air, steam or other media and is allowed to flow...

As you may know, a foot valve is a type of check valve that only allows one-way flow. You can use foot valves when...

Valves which are devices used to control the flow of fluids, have found their way into industrial applications worldwide.  There are many things to...