Flow control of liquid or gaseous solutions has long been carried out not only mechanically. Modern industrial enterprises are constantly upgrading the main devices to meet all requirements and standards. So, in recent years, so-called solenoid valves are increasingly used for industrial purposes. A solenoid valve is an electrically operated valve that is mainly used to regulate the flow of air or a liquid in pneumatic and hydraulic power systems. Different types of solenoid valves are available in the market based on application. To pick your type, Linquip provides a comprehensive guide for you. Read on to find out more about these different types. 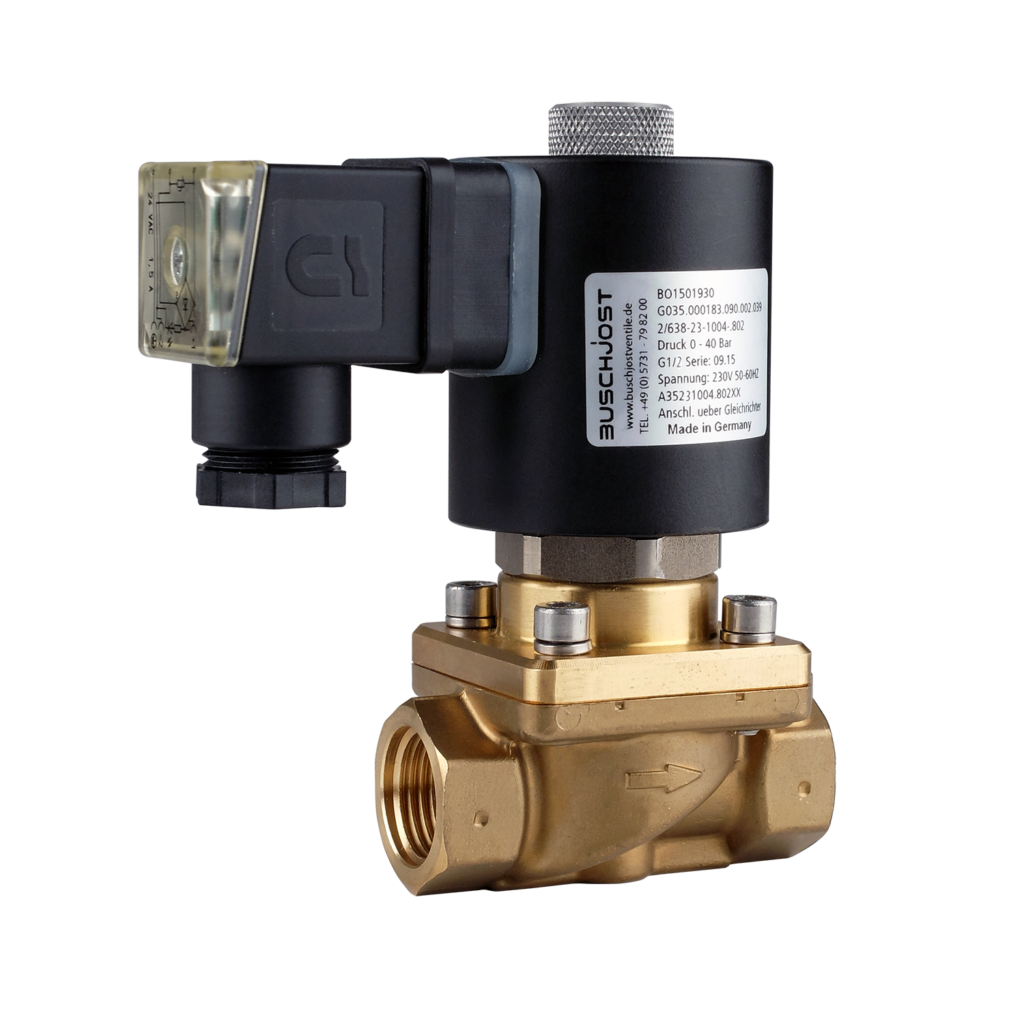 Based on the number of pipe connections:

Based on working principles:

The common types of solenoid valves are explained below. 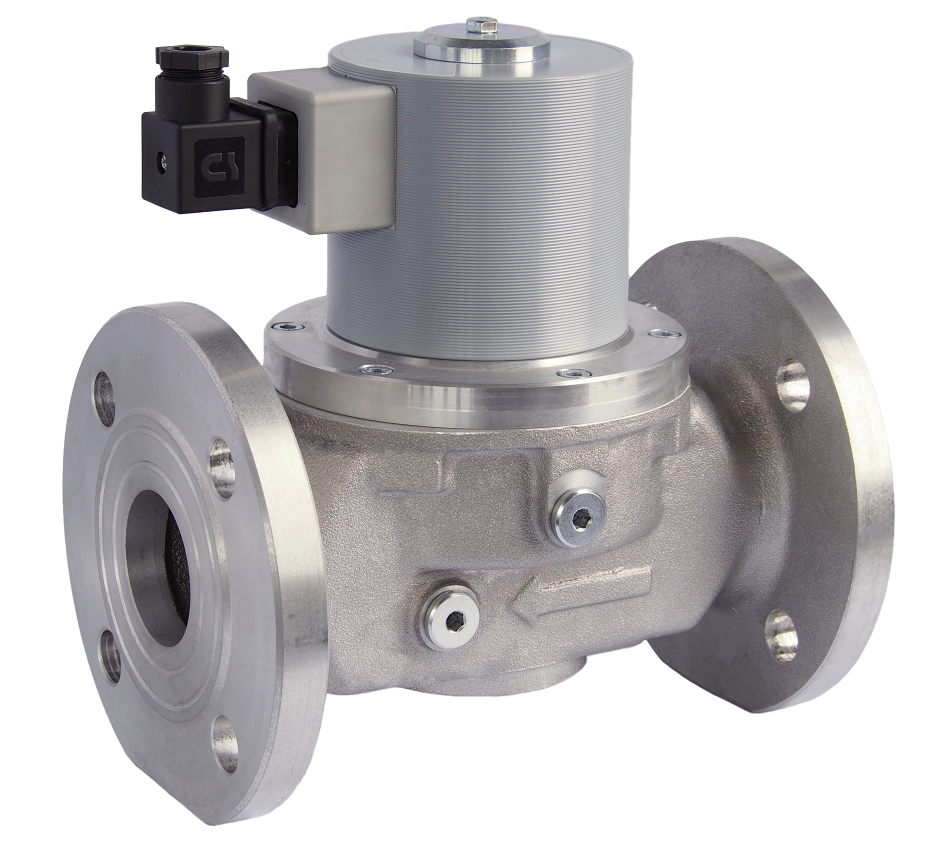 Based on the number of pipe connections

As the name suggests, a two-way solenoid valve has one inlet and one outlet piping connection. Each of these two ports is alternately used to permit flow as well as close it off. The inlet pipe should have greater pressure compared to the outlet in order to force the fluid through the two-way valve. The equal pressure of the two pipes will not facilitate the flow of fluid.

Two-way valves can be categorized into the following two types.

In a normally open valve, the valve remains open until some type of current is applied to close the valve. Suspension of the electrical power causes the valve to automatically reopen to its normal state.

A normally closed solenoid valve is the most common type, working in the opposite fashion, remaining closed until a power source causes it to open. 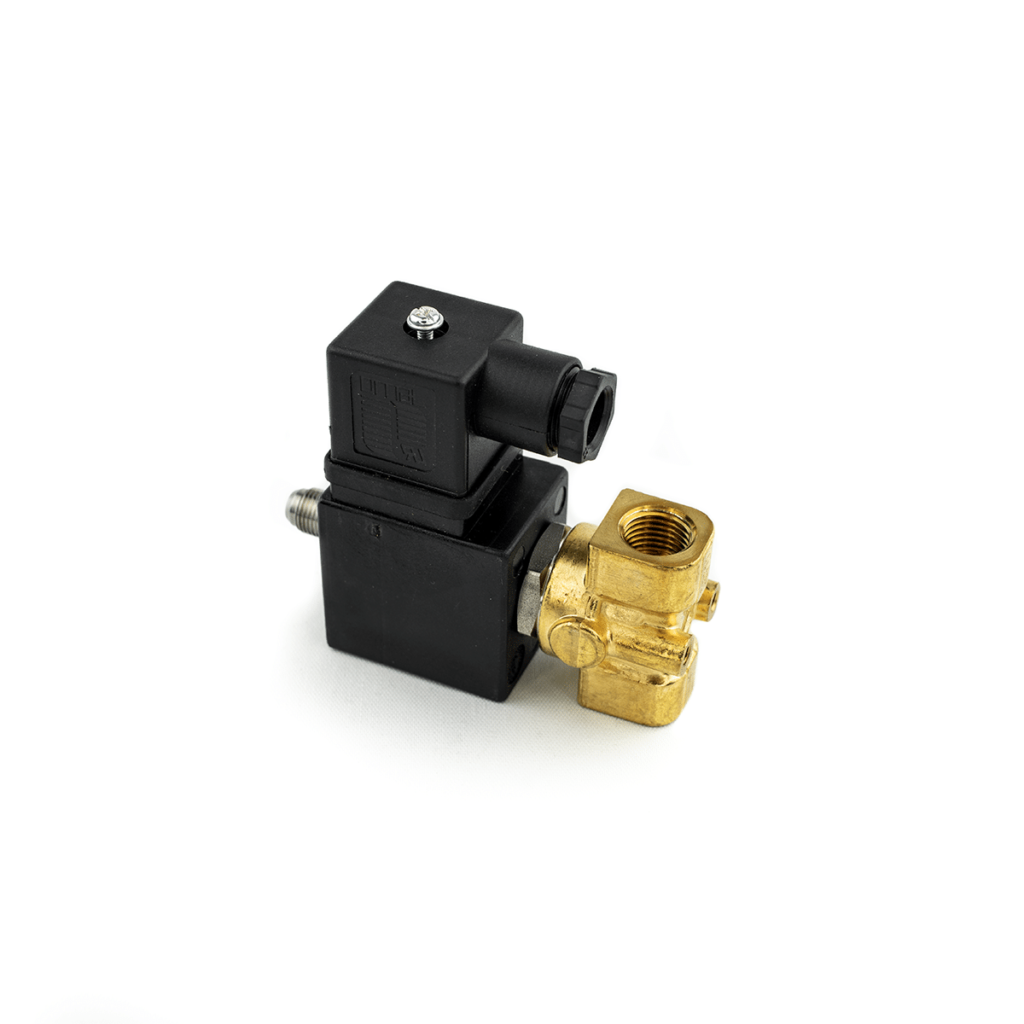 In response to an electrical input signal, the open/closed state of these two ports is reversed, allowing for various valve operations to be controlled. Flow can thus be diverted between channels as required, in accordance with the way the port connections have been set up and connected within the larger pipeline system.

This type allows the valve to be connected in either the normally closed or normally open position. In addition, the valve may be connected to select one or two ports or to divert flow from one port to another.

These valves can have four or more port connections. Four-way valves are commonly used with a dual-acting cylinder or actuator. In this version, half of the port connections supply pressure, and the remaining connections provide exhaust pressure. 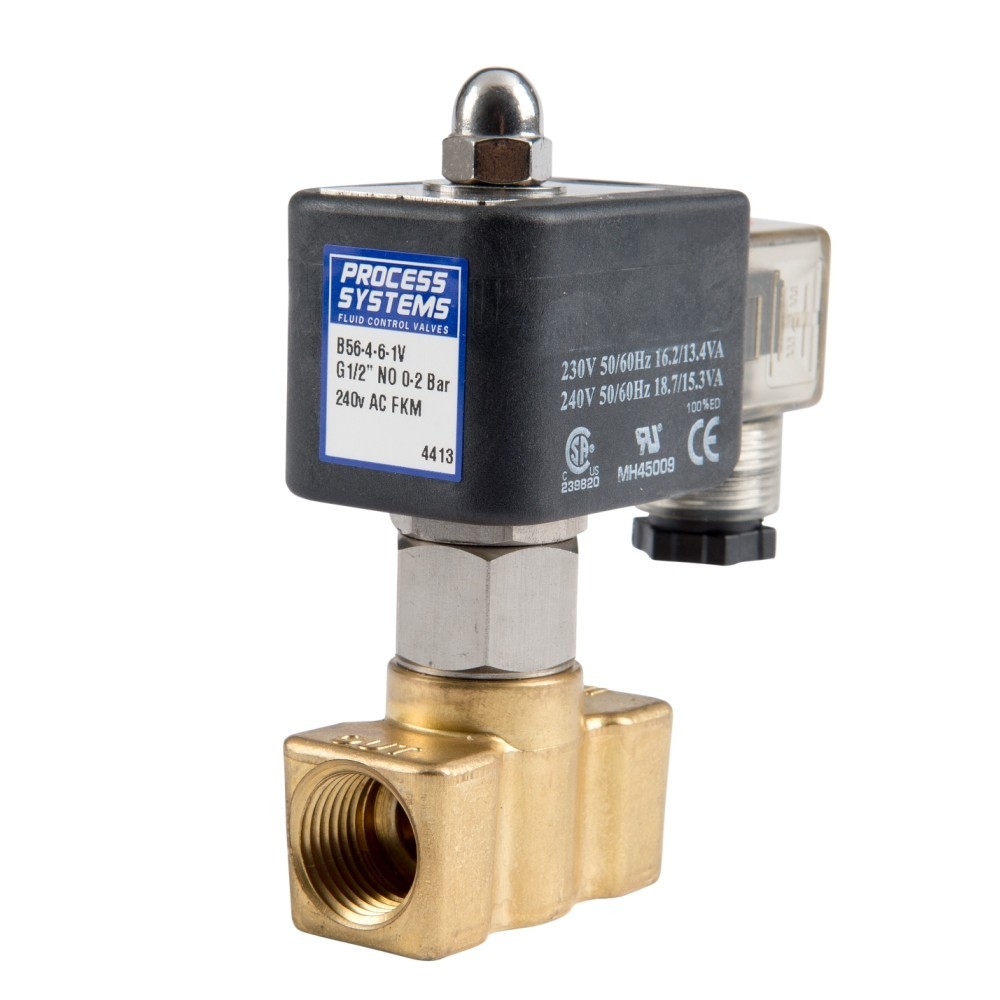 Based on working principles

These types of solenoid valves have a coil that magnetically opens the valve in direct action, causing the shaft and the seat of the valve to shift. Direct-acting solenoid Valves use the energy produced by the magnetic field of the solenoid to operate the valve. When the electrical current is removed, a mechanical spring returns the valve to its original position.

Direct-acting valves are utilized to prevent the development of too much pressure in a device.

In pilot-operated valves (sometimes referred to as an indirect-acting solenoid), the plunger opens up the pilot opening while the pressure causes the valve to open and close. In spite of the fact that pilot-operated valves require less electrical energy to work, they need to keep up full power with a specific end goal to stay in an open state, and they perform at a slower rate than direct-acting solenoids. Direct-acting valves just need full power when opening the valve, as they can hold their vacant position notwithstanding when working on low power.

There are two types of pilot-operated solenoid valves.

For high flow rate and high-pressure applications, internally piloted solenoid valves are used. In this type of valve, pressure across the valve opens or closes the valve. To achieve this, an orifice or an equalizing hole is installed. The usual design involves the core blocking flow on the orifice. When the valve is closed, the fluid passes through the orifice and pressure builds up on both sides of the diaphragm. As long as the fluid flow is blocked, a shut-off force is created due to the larger effective area on top of the diaphragm. When the valve is opened, the core opens the orifice, and pressure is relieved from the top of the diaphragm. The line pressure then opens the valve.

This type of valve applies the same concept from internally piloted valves, but the pressure used to actuate the valve comes from fluid from an external source. A separate fluid circuit is integrated into the valve through an extra port. 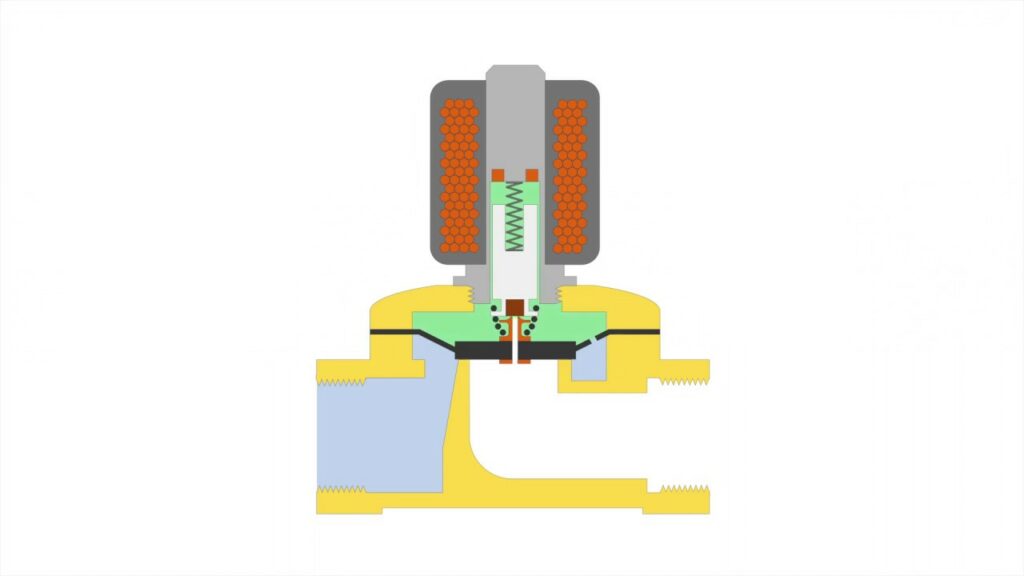 These types of solenoid valves are usually diaphragm or piston-operated valves. They are normally equipped with a 3-way or 4-way solenoid pilot that controls the opening or closing of the main valve using operating pressure.

A piston is normally used for pneumatic operation whereas low and instrument air-pressure range operators typically use a diaphragm. 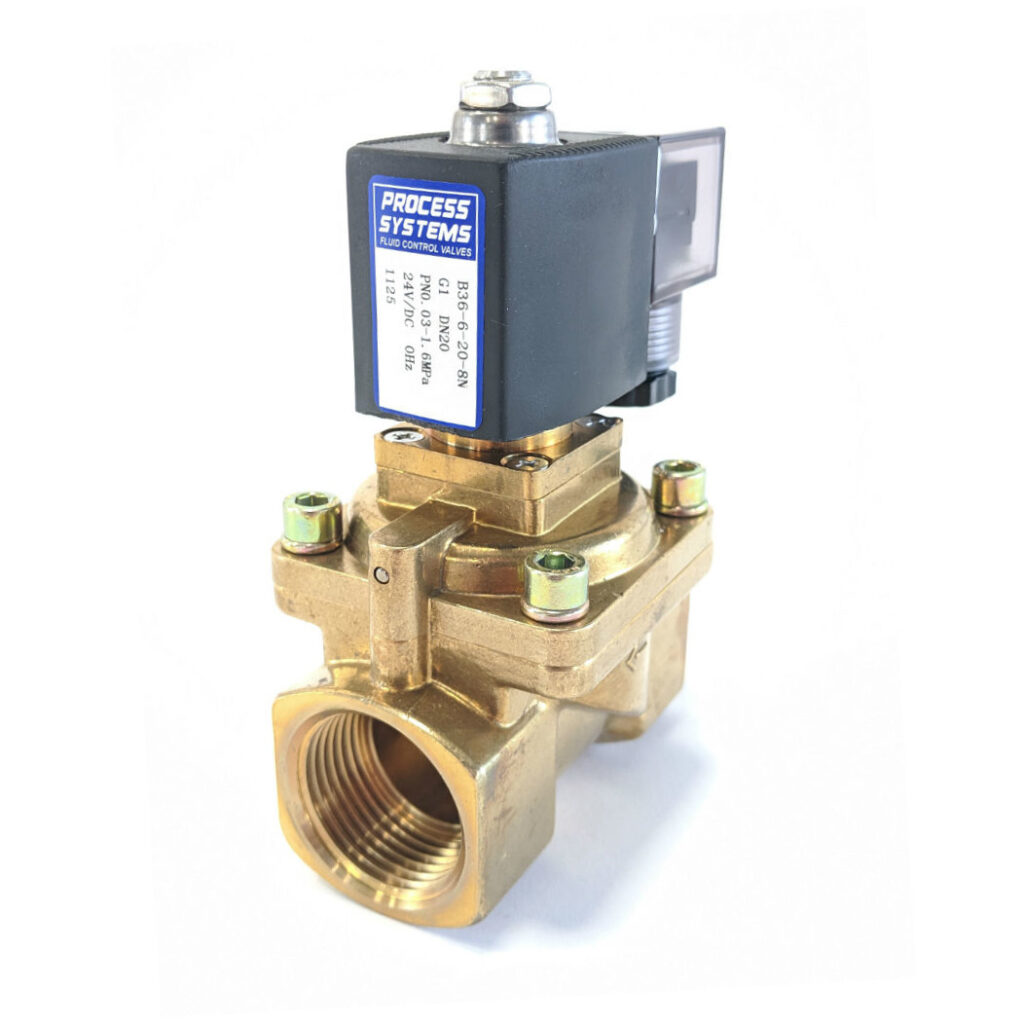 These types of solenoid valves are either normally open or normally closed valves used for controlling the flow of a fluid. However, these valves do not act as safety valves.

This is normally a closed valve of the “on” or “off” type that actuates using a safety control device for preventing unsafe fluid delivery. A multiple port valve can work as a safety shut-off valve with respect to its normally closed port.

These type of solenoid valves are approved to control flammable gases but does not reliably work as a safety shut-off valve.

So, this was everything you needed to know about different types of solenoid valves. If you enjoy this article, let us know what you think by leaving a reply in the comment section. We will be more than glad to have your viewpoint on the article. Is there any question we can help you through? Feel free to sign up on Linquip where our experts are prepared to provide you with the most professional advice.

3 thoughts on “Types Of Solenoid Valves: Everything You Need To Know”