The hype around renewable power generation and going green grows every day, and with wind energy being one of the important renewable energy sources, a question might come to light: What is a wind turbine? Well, wind turbines come in different designs and different sizes, and each is suitable for its specific application. What we intend to do in this post is to provide e simple answer to the question of “what is wind turbine”.

Additionally, here at Linquip, we have also provided our customers with a convenient platform for finding the right wind turbine, purchasing it, and receive technical consultation.

What is wind turbine?

The law of conservation of energy states that no energy is generated or destroyed and it only converts from one form to another. So, when we talk about wind turbines, we are talking about converting the wind (kinetic) energy into electrical energy. Now, what is a wind turbine? A wind turbine is a device that generates electrical energy from rotation of its shaft, which itself is induced by rotation of some compartment that moves as air stream passes over it. This compartment is the rotor of the wind turbine.

The demand for energy rises every day, and with all the environmental issues the world is facing today including global warming and air pollution, it is not wise to still be solely reliant on the conventional hydrocarbon power sources. Therefore, the need for green and renewable sources of energy is growing at a fast speed.

One of the most important sources of green and renewable energy is the wind. Wind blows everywhere in the world, and there are so many spots where it can be actually utilized to generate power from small scales used for homes to industrial ones as well as feeding the power grids of towns and cities.

In many places the government actually supports citizens if they could and decided to switch to renewable sources of energy. Moreover, without the need to pay for the electric bills is an interesting motivation to consider wind turbines for many applications.

To answer the question of “what is wind turbine” more completely, apart from what has already been mentioned, one must say that wind turbines come in two different designs, one of which is called the Horizontal Axis Wind Turbine (HAWT).

In this configuration, there are rotors installed on a shaft also called collectively as the turbine. There is an electrical power generator coupled with the turbine via the shaft. This way, as the rotors rotate, the kinetic energy of the wind is converted to electrical energy at the generator.

The reason this design is called horizontal axis is that the rotating shaft axis is placed horizontally. The most conventional design of HAWT is one for which the turbine/generator set is taken to a height at the top of the turbine tower, and the rotors are configured in a way that looks like a giant airplane propeller installed at the top of a tower instead of an aircraft wing.

There is also a wind sensor on the large-sized versions of these wind turbines that adjusts the facing direction of the rotors along to the path of the wind using a servomotor. The smaller wind turbines might use other configurations such as wind vanes to redirect the air.

The mechanical coupling of the turbine shaft and the generator is usually done via a gearbox, which bears the responsibility of converting the slower rotation of the turbine rotor to a higher rotating speed at the generator. There are also direct-drive designs that do not have any gearboxes. These gearless turbines make use of permanent magnets instead of gearboxes for generator speed adjustment. They are more expensive than their geared counterparts, but require a lot less maintenance costs structural fatigue and reliability issues of geared wind turbines.

The most common and standard design of HAWT is the three-blade design. However, single-bladed and two-blade design are also available as well as rotors with as many as twelve blades. The three-blade design is more stable and is less prone to torque ripple. Torque ripple is a phenomenon in many electric motor designs referring to periodic ups and downs of their output torque as the turbine rotates.

The rotors are mostly installed upwind, which means before the air blows past the tower and its flow field is affected by the structure. The are also downwind designs which have their own advantages such as their lack of need for alignment with the wind. They are, however, prone to turbine damage due to load changes on the turbine blades. 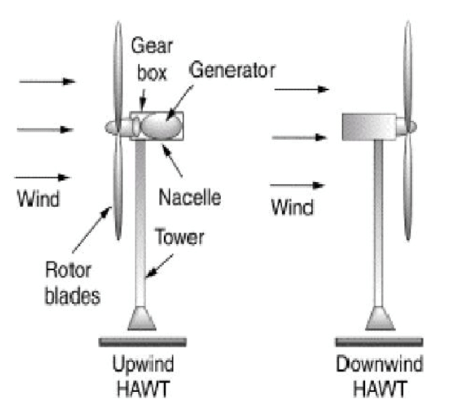 One of the advantages of horizontal axis wind turbines is their ability to handle higher wind speeds than the other wind turbine design. Their downwind configuration does not require a yaw mechanism to place the turbine inline with the wind direction and could weigh less due to having variable-pitch blades.

The disadvantages however include the requirement for a yawing mechanism for the common upwind designs and structural fatigue for the downwind configuration due to flow field passed the mast. They also require tall masts and are inefficient near the ground. Another disadvantage of this design is the necessity for large spaces between each turbine due to having normally aligned wind streamlines for each unit of the wind turbine.

The complementary answer to the question of “what is wind turbine” is the other of the two designs of wind turbines called the Vertical Axis Wind Turbine (VAWT).

In these designs, the rotating shaft is vertically installed which means it is perpendicular to the direction of the wind and the ground. There are also some other designs that .

In any ways, due to the nature of this design, there is no need for any wind sensors or yawing mechanism to align the rotors with the wind directions. The design also allows for less structure heights, which makes them suitable options for being installed on the rooftops for small scale power generation. The design also allows for an easier service and repair dues to the fact that the gearbox and generator are placed near the ground.

One of the advantages of VAWT over HAWT, as already mentioned, is that they do not require any yawing and wind direction sensing or even pitch varying mechanism, and they work with the wind coming from all directions, so are the best choice for places where the wind direction changes frequently and significantly. Their design also allows for a better performance in turbulent winds.

As already mentioned, their gearbox and generator maintenance and repair are also easier and a lot less costly since they are closer to the ground. Moreover, their design allows for less space required between each two VAWT, which means possibly a more power generation level per unit of area. In some creative installations, VAWTs are installed below the existing HAWTs as supplementary power generation units.

The most important disadvantage of vertical axis wind turbines is their significant torque ripple for many of the designs due to dynamic stall of blades following the quick alteration of their angle of attack. Due this situation, the blades are also more prone to structural fatigue for more conventional designs.

“What is wind turbine”-related Q&A