Wind turbines harvest the renewable source of wind’s energy, but there are various types of wind turbines some of which could be used for small scale domestic applications and some used in wind power plants. Since going green is becoming more import by day and human civilization is highly reliant on energy, wind energy and the equipment by which it is harvested are now important more than ever. Therefore, it is quite beneficial to know about how various types of wind turbines look like and where they could be used.

On the Linquip platform, you’ll find all the information about wind turbines you need. If you have any questions related to the wind turbine, we are here to help. To start, visit Linquip and explore the article “What Is a Wind Turbine?” for a basic understanding of these renewable energy devices.

Are you in need of a wind turbine? For free, you can view a wide selection of Wind Turbine Products here at Linquip. What types of wind turbine equipment are you looking to buy? Linquip provides no-cost access to all available Wind Turbine Devices for Sale. Linquip also provides you the option to send inquiries to all Wind Turbine Suppliers and Companies and receive quotations for free if you are trying to find wind turbine prices.

Wind Energy: What It Is and What Are Its Types

Various factors act to put the atmosphere into motion, a phenomenon we call wind. Now, this naturally occurring motion or kinetic energy is out there, and it only seems reasonable to find ways to harvest it. Easy wind kinetic energy is nothing new for us humans. We have already used it to turn our windmills since almost a thousand years ago. As another example, we have been using it in windjammers for so long. But are there any other ways to use wind energy in a more tangible application?

The answer is of course a big YES! The essential idea is that the kinetic energy of wind can be used to rotate some equipment, as it is the case with windmills, but this time to generate electricity, as it is the case for gas turbines where the hot gas turns the turbine and generates power. Therefore, what we generally mean these days by wind energy is wind power, which is generating electrical energy from wind kinetic energy using equipment called wind turbines.

We may classify wind based on where its energy is harvested into land wind and offshore wind. Land wind itself can be further classified into two types of “small wind” or “distributed wind”, and utility-scale” wind:

One of the important types of wind turbines is the HAWT, which is the most widely used wind turbine out there. These types of wind turbines are probably what you would think of when you hear “wind turbine.” The design of these turbines follows pretty much the same idea already implemented in windmills; rotor blades that are connected to a shaft and rotate it as the wind strikes them, only this time the shaft is connected to a generator that produces the promised electrical energy. They look something like a large aircraft propeller mounted on top of a mast or tower.

Horizontal axis wind turbines are one of the types of wind turbines that require being aligned with the wind direction. Therefore, they require a wind sensor that detects the direction of wind and some yawing mechanism that turns the device in order to be properly aligned against the wind. The reason for necessity of facing the wind is both a more effective distribution of force on the rotors, and prevention of structural damage to the turbine due to improper loading on the turbine structure.

Speaking of structural considerations, the structure of horizontal axis wind turbines needs to be strong enough to support the weight of the rotor blades, gearbox, generator, and other components of the turbine. Additionally, the base of the mast shall be able to withstand strong winds that are blown where the turbine is installed.

These types of wind turbines are the ones most commonly used. Up-wind HAWTs face the wind, which means the wind reaches the rotors before the mast. Therefore, rotors do not suffer from the wind shade behind the tower, which means a more efficient operation as well as less susceptibility to wear and tear of the rotors. Nonetheless, the necessity for the yawing mechanism adds to the weight of the structure. 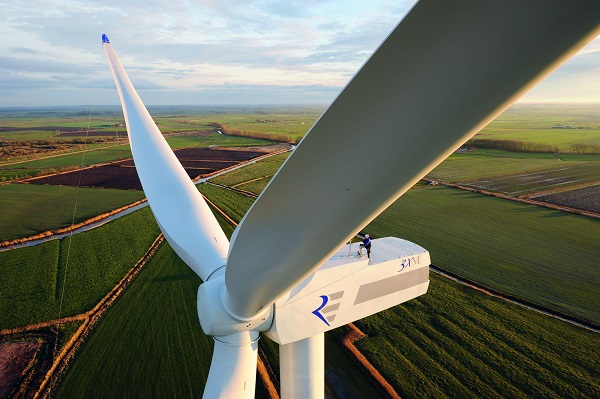 Another point about up-wind types of wind turbines is that their rotors should not be flexible, so that they would not bend and collide with the mast when the speed of wind is high. To further avoid such incidences, the rotor is placed at some distance from the tower. This adds to the manufacturing difficulties of these types of wind turbines, and the rather inflexibility of the rotor blades equals requiring heavier material for blade construction.

Down-wind horizontal axis wind turbines are the less commonly seen types of wind turbines. Their design looks pretty much the same as up-wind HAWTs except for the location of rotor, which is downstream of the tower; the wind strikes the mast before it reaches the blades. This configuration allows for more flexibility of the rotor blades, and therefore, lighter material can be used. Hence, this design serves two purposes of lighter structural weight and better structural dynamics of the tower by taking some of the load off the tower to the blades during their bending.

Down-wind horizontal axis types of wind turbines theoretically do not require any yawing mechanism as long as the rotors and the casing are designed in a way the casing would passively follow the wind direction. The passive yawing of these wind turbines would not be an advantage for large wind turbines that have earthing cables attached to the casing.

Vertical axis wind turbines (VAWT) are one of the types of wind turbines for which rotors rotate a shaft that is installed vertically. Such way of design allows for less sensitivity regarding wind direction, making them the perfect choice for places where the wind direction frequently changes. No matter what direction the wind blows, the blades would still move and rotate the shaft to produce power.

The generator of these types of wind turbines is located near the ground. This is because taking it to a height would not be so plausible given the design of rotors and their height. This configuration makes the maintenance of the vertical axis wind turbines easier compared to horizontal axis wind turbines, which has all the components installed at some height. However, vertical axis wind turbines have less efficiencies than HAWTs due to significant amount of air drag on the rotors for some designs, as well as less power output due to the fact that wind speed and its flow at a distance from the ground is higher and smoother than ground level.

The force that makes Savonius turbines turn is drag, which makes them of drag-type VAWTs. The idea of their design is pretty much similar to cup anemometers. In cup anemometers, such as the one below, there is always a cup facing the wind experiencing the most drag exerted on its surface, while other cups have their other round-shaped and hence drag-lowering surfaces facing the wind.

What happens in Savonius types of wind turbines follows the same logic. As can be seen in the figure below, there is always a surface with the most drag while others experience less drag force exerted on them.

The important point about this design is that it would rotate no matter what direction the wind blows. These types of wind turbines are also very good at working with low-speed winds, are easy to manufacture and maintain, and are work well in turbulent wind. Despite these advantages, this design is highly inefficient. It is because the favorable and adverse drag forces are not so different from each other, and therefore, the speed of rotation would not be so high.

There are these twisted Savonius turbine designs that have long helical scoops that generate torque smoothly that could be used on rooftops.

Darrieus wind turbines in contrary to the Savonius wind turbines are of the lift-type VAWTs, in which the idea of lift production of airfoils has been implemented. These types of wind turbines are the most widely used type of vertical axis wind turbines for power generation with curved blades, C-shaped, that go from the top of tower to the bottom where it is connected to the generator shaft. They have good efficiency because they rotate at higher speeds that could generate more power.

This higher RPM comes with lower torque to a level that necessities an external source of starting mechanism for these types of wind turbines, such as another Savonius turbine that would bring the speed of rotation to a level where the Darrieus blades could “take the wheel”. They also suffer from torque ripple, which is a periodic increase and decrease of the generated torque, and therefore periodic stress on the tower structure. Three bladed Darrieus wind turbines do not suffer from this torque ripple issue.

When the turbine reaches a specific RPM, the blades change their pitch in order to produce more lift rather than drag to take the RPM to even higher levels, similar to how it is for Darrieus wind turbines. As interesting as it sounds to have such an efficient and flexible VAWT, it is clear that their design and manufacturing is more complicated than the other designs making them expensive, and will have more components, and therefore, are heavier with more maintenance requirement.

Apart from these newer designs of the same HAWT and VAWT concepts, there are bladeless wind turbines such as vaneless ion wind generators, boundary layer turbines, etc.

Some other concepts are also gaining momentum, such as SheerWind’s INVELOX that first collects air from different directions, funnels it to a section that reaches a Venturi, in which a turbine with a higher frequency than conventional HAWTs is placed.

What Are the Environmental Effects of Wind Turbines?

Despite its many benefits, wind energy is a potential threat to the environment, including the reduction, fragmentation, and degradation of wildlife, fish, and plant habitats. The spinning blades of turbines can also be dangerous to flying creatures like birds and bats.

Does It Make Sense to Invest in a Home Wind Turbine?

Residential wind turbines can be a profitable and practical power source for homeowners in the right circumstances. A wind turbine may not provide all the electricity you need, but it could lower your electricity bills significantly. Make sure you choose the suitable turbine for your location.

You can also download a PDF version of this article to your computer. The document below can be downloaded.

There are simply a lot of interesting wind turbines out there that is way out of the scope of this post, but you could research them on your own. This post has tried to be a good start with some useful keywords to help you continue the journey by yourself. You can also watch here for some introductory videos about wind turbines. Good luck!

3 thoughts on “Types of Wind Turbines: The Quick and Easy Intro”