The thermal power plant, also known as a thermal power station, is used to convert heat energy into electricity for residential and commercial usage. Steam-operated turbines turn heat into mechanical power, which is then converted into electric power in the electric power production process. Power plant equipment is provided by several Suppliers and Companies, different manufacturers, and a lot of distributors and there are a lot of  Power Plant Equipment for Sale on Linquip.

There is a complete list of Power plant equipment services on the Linquip website that covers all energy demands. Linquip vendors can assist you with this. Please contact Linquip’s Power Plant Equipment Experts to learn more about how to connect with a diverse group of service providers who consistently deliver high-quality items.

In this article, we explain how electricity is generated by reviewing the flow of the thermal power plant diagram. Read this new blog in Linquip to find out more. 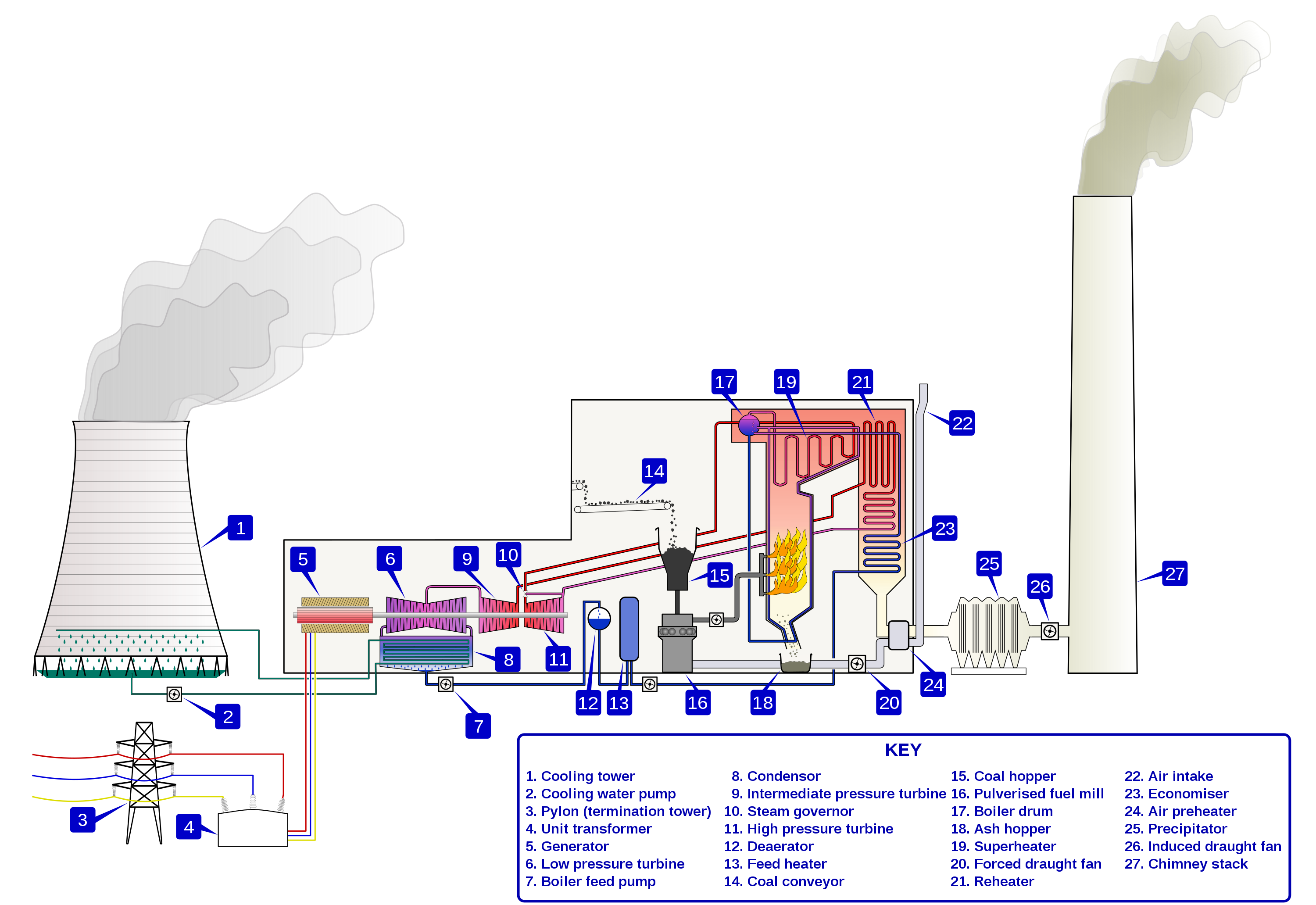 Here are the main thermal power plant parts and functions.

As we know here a huge amount of water is present, and it is further used for the generation of electricity.

As the name indicates, a low or high-pressure heater means that it increases or decreases the pressure of the water.

In the boiler, there are two sections: one section refers to coal storage and coal handling that store the coal and further used it when needed. The other section is the ash handling and ash storage plant that the produced ash of the process of coal-burning goes to ash storage.

The mixture of pulverized coal and air is taken into the boiler and then burnt in the combustion zone. On ignition of the fuel, a large fireball is formed at the center of the boiler and a large amount of heat energy is radiated from it. The heat energy finds use to convert the water into steam at high temperature and pressure. Steel tubes run along the boiler walls in which water is converted into steam. The flue gases from the boiler make their way through the superheater, economizer, air preheater, and finally, get exhausted to the atmosphere from the chimney.

An economizer is essentially a feedwater heater that heats the water before supplying it to the boiler. When water pressure gets increased there some amount of heat generates and that heat sends from the economizer to the boiler.

The primary air fan takes air from the atmosphere, and it is then warmed in the air pre-heater. Pre-heated air is injected with coal in the boiler. The advantage of pre-heating the air is that it improves coal combustion.

The main function of the turbine is that when steam strikes the turbine the blade rotates and it converts the heat energy into mechanical energy. High-pressure superheated steam is fed to the steam turbine which causes turbine blades to rotate. The energy in the steam is converted into mechanical energy in the steam turbine which acts as the prime mover. The pressure and temperature of the steam fall to a lower value and it expands in volume as it passes through the turbine. The expanded low-pressure steam is exhausted in the condenser.

The condenser presents here to cool the working fluid or we can say to remove the heat from the water. The exhausted steam is condensed in the condenser using cold water circulation. Here, the steam loses its pressure as well as temperature and it is converted back into the water. Condensing is essential because compressing a fluid that is in a gaseous state requires a huge amount of energy concerning the energy required in compressing liquid. Thus, condensing increases the efficiency of the cycle.

A condenser needs a huge quantity of water to condense the steam. Most plants use a cooled cooling system where warm water coming from the condenser is cooled and reused. A cooling tower is a steel or concrete hyperbolic structure with a height of 150m.

The steam turbine is coupled to an alternator. When the turbine rotates the alternator, electrical energy is generated. This generated electrical voltage is then stepped up with the help of a transformer and then transmitted where it is to be utilized.

The condensed water is again fed to the boiler by a feedwater pump. Some water may be lost during the cycle, which is suitably supplied from an external water source. 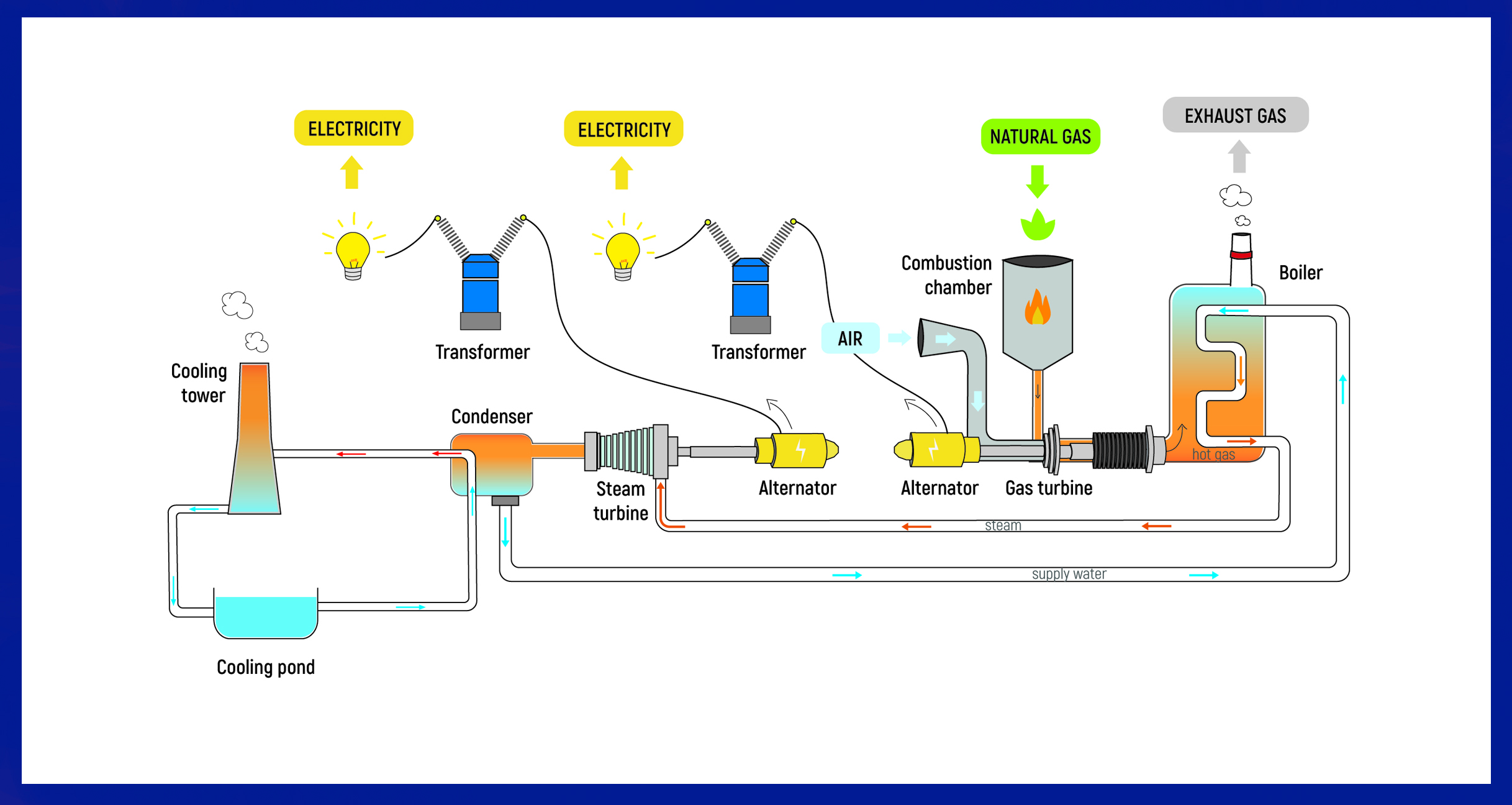 The following circuits describe the working of the thermal power plant.

The coal is transported from coal supplying authorities to the coal storage yard of the generating plant. From here the coal is delivered to the pulverized coal plants with the help of a conveyor. After removing unwanted substances from the coal, it is pulverized in coal dust. Pulverisation makes the coal more efficient for burning. After the combustion of the coal, the ash is collected at the ash handling plant. Then the ash is finally collected in the ash storage yard.

The systems involved in this circuit are the Air filter, Air Preheater, Dust Collector, Chimney. The air from the atmosphere is sent to Air Preheater. After that, with the help air filter series dust from the air is removed. The chimney will serve as a system to dispose of waste (exhaust gas). As the flue gas flow diagram of the thermal power plant shows, after the combustion process, the flue gas which has a sufficient quantity of heat is made to pass boiler tubes, dust collectors, economizers, and  Preheater before passing out through a chimney. The water and air get preheated by passing the flue gas around the economizer and Preheater. All these things will happen before going to the boiler.

The system involves the following boiler feed pump, boiler, turbine, and feedwater heaters. The steam which was produced is passed through the superheater and then to the steam turbine. The steam turbine is coupled to the condenser where the steams exits. In the condenser, the steam is condensed. Then the condensate is heated through a high-pressure and low-pressure heater. In the economizer, the steam is further heated. There would a loss of water and steam while passing through different components, to compensate for those losses feed water is supplied.

The cooling circuit consists of the cooling water pump, condenser, and cooling tower. A massive amount of water is needed for condensing steam in the condenser. A large supply of water can be from lakes or nearby rivers. If the enormous amount of water supply is not available means, the water coming out from the condenser can be cooled and reused. 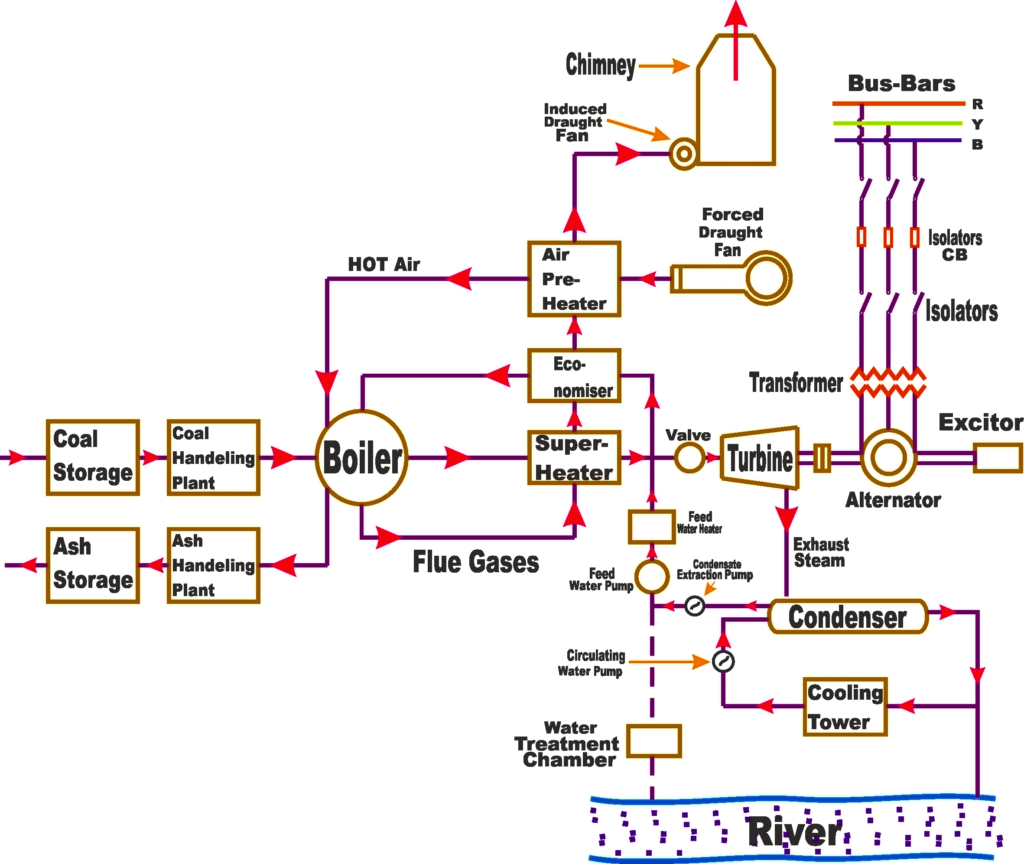 So, there you have a detailed description of the typical diagram and working of a thermal power plant. If you enjoyed this article in Linquip, let us know by leaving a reply in the comment section. Is there any question we can help you through? Feel free to sign up on our website to get the most professional advice from our experts.