Gas Turbine Cycle: Everything You Need to Know About Gas Turbine Working Principle

What is the gas turbine?

Gas turbines are considered as a type of internal combustion engine that is also continuous. This turbine operates with rotary motion instead of reciprocating motion.

There are three main elements that are common in the design of all gas turbine engines. These elements are:

The downstream power turbine is located on the same shaft as the compressor.

Some turbines also contain a fourth element to boost efficiency, increase thrust to weight ration, and also to convert power into other forms (mechanical or electric.) 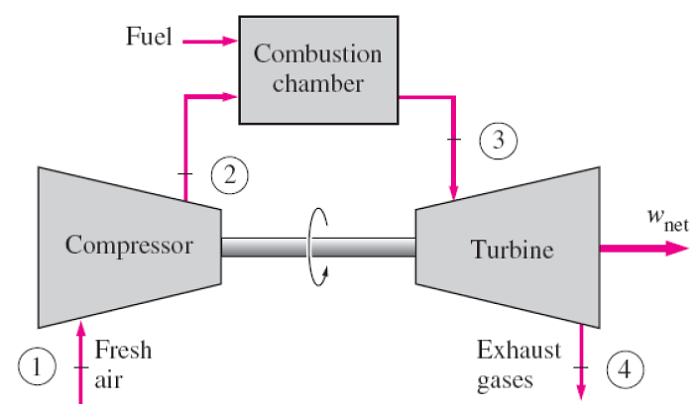 Though this cycle is not ideal for open circle gas turbines, it’s still used for them with a small change in the steps. They are perfect for the closed-cycle gas turbine. This cycle contains four steps:

The compressor part of the gas turbine has been designed in a way that receives the flowing atmospheric air which increases the pressure. The air in this process is compressed up to 30 times more than the ambient pressure. When the air flows through this element, fuel will be sprayed into the air. Then, igniting this fuel with air will add energy and the combustion results in generating a high-temperature flow.

The outcome of the combustion chamber, which is a high-temperature pressurized gas, will enter a turbine to produce a shaft work output which drives the compressor. The extra energy will be exhorted out in the exhaust gasses and will be used for external work or will be repurposed for other uses such as rotating a second power turbine.

In an open cycle gas turbine that has open systems, the fourth step of the gas turbine cycle (Brayton cycle) is omitted because these gas turbines do not reuse the same air for cooling of the working fluid (this cooling is the last step of the mentioned cycle.) closed-cycle ones have this fourth cycle as well.

These elements are all connected together with the help of one or several shafts and all of them together are called gas turbines or gas generators. 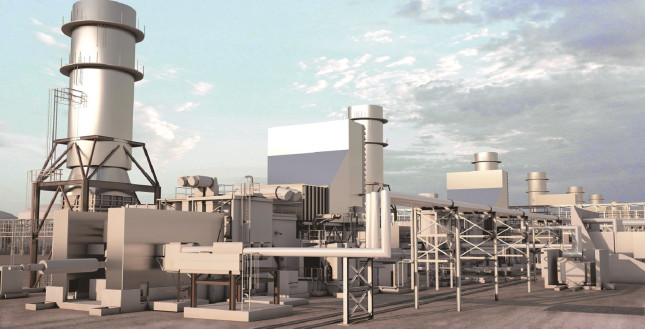 The main difference between these two gas turbines is that the open cycle one releases the exhaust gasses that leave the turbine into the atmosphere and these gasses are not recirculated. As we already mentioned in the steps of the gas turbine cycle, the fourth step only happens for the closed-cycle gas turbine that reuses the same air for cooling of the working fluid.

Advantages and disadvantages of gas turbine

Gas turbines have some disadvantages as well. A gas turbine’s core engine can be expensive since it uses exotic materials which can cost a lot. Another disadvantage of gas turbines is that compared to reciprocating engines, they are less responsive to changes that happen in the power demand. One of the most important things is that reciprocating engines at idle speed are far more efficient than gas turbines. But don’t forget that they can run on a wide variety of fuels and have lower peak combustion pressures than these engines.

Gas turbines are highly reliable where you need sustained high power output. Another good thing to remember about gas turbines is that compared to reciprocating engines, they have a very high power to weight ratio. Plus, waste heat that is produced in the gas turbine cycle almost entirely dissipates in the exhaust. Not to mention that the smooth rotation of the main shaft is the reason why the gas turbine has less vibration compared to the reciprocating engine.

All in all, it highly depends on your application and the place you want to install the turbine to know whether the fourth step of the gas turbine cycle is needed or not and which engine to choose when buying a turbine.

Now you know all there is to know about the gas turbine cycle, its components, and the working principle. What do you think about gas turbines and other turbine types? Comment below and share your thoughts and knowledge with us and our readers. Do you still have questions about their working principle? Then feel free to sign up on Linquip and our experts will help you get the answers to all your questions.

What is Hydrokinetic Turbines? Working Principles and Output Power

What is Propeller Turbine? Types and Working Principles

Beginner’s Guide: The Difference Between Gas Turbine and Gas Engine

How Do Wind Turbine Generators Work?