As a professional network in the area of industrial equipment, we invite you to read this guide about gas turbine types at Linquip, find more useful information about the working principle of gas turbines, their applications, and learn about compressors and combustor types.

There is a comprehensive list of turbine services on the Linquip website that covers all of your needs. Linquip suppliers can assist you with this. Please contact Linquip’s Gas Turbine Experts to learn more about how to connect with a diverse group of service providers who consistently deliver high-quality products.

Any gas turbine operates with  intake, compression, expansion, and exhaust cycle. As a fundamental of the gas turbine working principle, in each gas turbine type, the compressor first compresses the air and this air is then driven through the combustion engine. Fuel is continuously burned for high-temperature and high-pressure gas processing. What a gas turbine is doing is expanding the gas generated by the combustor into the turbine and thus generating the rotary energy that is used by the compressor on the preceding stage. There is an output shaft for the remaining energy.

Regarding gas turbine applications, these turbines are one of the most popular technologies for the generation of electricity today. Their power generation could also be utilized in chemical plants and refineries. They have significantly contributed to cleaner power generation in recent years. The production of new and advanced technologies would allow better use of gas turbines across multiple power sectors, from electricity production to transport and aviation, thereby improving the efficiency of all these industries.

Apart from electricity production in power and chemical plants, these turbomachines are also the backbone of today’s aviation and aircraft propulsion. Different types of gas turbines are used in aircrafts from small passenger ones such as the beautiful Hawker 400, formerly known as the MU-300, to the magnificent A380. They are also used in cargo airplanes from small to large such as Airbus Beluga. Military aircrafts are also propelled by jet engines.

If you dig even deeper, you will find records in history, where jet engines were proposed for locomotive, marine, and automotive propulsion as well.

Here, we introduce the four major types of gas turbine engines. Do pay attention that such variety of gas turbine design is only present in aircraft gas turbines. For gas turbines used in power plants, the configuration is rather similar to turbojet engines to be discussed below.

The first gas turbine type was turbojet engines. Although they look entirely different from reciprocal engines, they operate on the same principle: intake, compression, power and exhaust. In this type of engine, air is moved at a high speed to the fuel inlet and ignitor of the combustion chamber. The turbine induces accelerated exhaust gases by expanding air.

The world’s best turbojets and turboprops is paired with turbofan engines. Turbofan engines can be connected to the front of a turbojet engine with a duct fan. The fan then creates an extra push, helps the engine to cool and reduces the engine noise output.

The fourth gas turbine type is turboshaft engines that are used mainly on helicopters. The biggest difference is that turboshaft engines use the bulk of their power to spin turbines instead of driving them out from the rear of the vehicle. Turboshaft engines are a turbojet motor with a large shaft connected to the back of it.

A gas-turbine engine can produce useful propulsive thrust. This can power a generator, pump, or propeller and create the thrust through the nozzle in the case of a pure jet engine. While the gas turbine engine is a simple system, components for a powerful machine must be carefully built and produced from expensive materials due to their high operating temperatures and stresses. Thus, the installations of gas turbine engines are typically limited to large units in which they are economical.

Additionally, gas turbine components are basically: a compressor (takes in and compresses the air), combustor (Fuel is applied to the air and ignited), turbine (converts high-speed gas energy into rotary power through expansion), gearbox and shaft (provides the driven devices with rotary power), and exhaust nozzle (runs out of the turbine part the low emissions of spent gas).

The main components of a gas turbine engine will be further discussed in the following. Note that gas turbine gearbox is quite common in many current gas turbine designed used in the world. This component is responsible to effectively deliver the produced power of the turbine to the moving parts based on its rotational speed and power output. However, there are newer designs that enjoy a direct drive configuration, i.e. no gearbox is present inside the gas turbine engine, and the turbine rotational power is directly transferred to where it is needed. 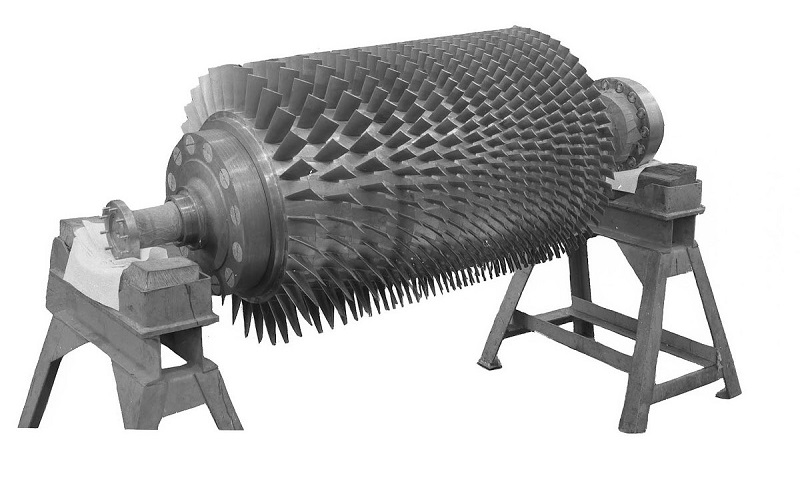 No matter what a gas turbine type you consider, all gas turbines have a compressor that increases input air pressure before entering the combustion engine. The output of the compressor is critical for the overall engine efficiency.

In the medium-to-high-strength gas turbines, axial compressors are used because in a cross-sectional field, alternative centrifugal units are too heavy and too big. The axial blading at the back of the compressor loses its power at smaller sizes and is difficult to produce precisely. The rear stages are then replaced by a centrifugal unit by manufacturers. Axial compressors in turbines that produce more than 5 MW are used for power generation.

This design inherits a relatively larger mean radius at the outlet than the inlet from the centrifugal design; however, the airflow at the exit has an axial direction rather than radial. This design logic is, therefore, using the main advantages of centrifugal and axial designs. As you might already understood for the centrifugal design, the exit diameter should be relatively large making it a problematic design configuration for many applications. The mixed-flow design, however, does not suffer from this issue. 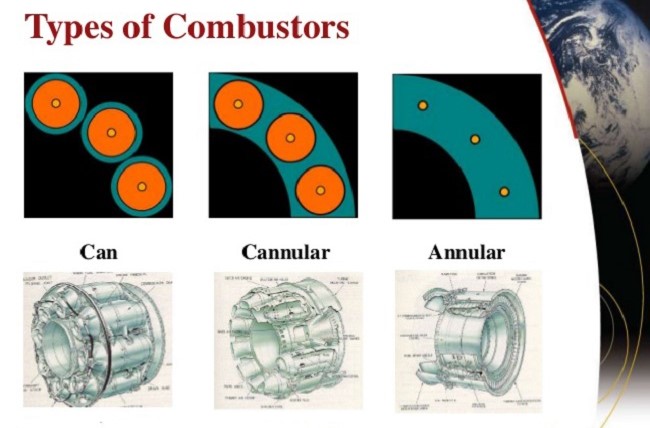 combustion chamber or combustor is an important component of gas turbine engines, in which the fuel molecules go through the exothermic chemical reaction of combustion, or simply called burning, producing an enormous amount of heat.

The chemical reaction leaves a mixture of different gases that are not only extremely hot because of the nature of the process they went through, but also have a very high pressure as their parent gases came from the compressor. This makes them begging to run out of the chamber and expand in the turbine.

Turbine is where the mechanical power generated. This mechanical power is generated when the hot gases exiting the chamber pass through the turbine blades forcing them to move about their axis of rotation. Now is different design configurations, this power is utilized differently.

In power plants, the hot gas is expanded in the turbine in order to provide the power required to rotate the compressor blades as well as producing electric power. The hot gases do not lose all their heat even after passing through the final stage of the turbine, so their heat can be further utilized by directing them towards boilers in thermal power plants.

The same logic is present in turbojets. In turbojets, the gas is expanded only enough to provide the power required by the compressor as well as some electric power required for instruments. The airplane in this configuration is thrusted due to the expansion of hot gases in the nozzle producing a jet of gases exiting the engine, hence the name.

In turbofans and turboshafts, the hot gases are further expanded in the turbine to generate more mechanical power to provide the power necessary to rotate the fans or the helicopter blades that are the main sources of propulsion for aerial vehicles employing these engine configurations.

A single-shaft or two-shaft configuration may be used in gas turbines. The single-shaft structure consists of a shaft which connects a rotating part of the air compressor, gas turbine maker, and power turbine. This design is best suited for applications at constant speeds, such as electrical generators for constant frequencies.

The two-shaft configuration involves the air compressor, the gas supplier, and the power turbine on the second independent shaft. This design offers the speed in a flexible way needed to effectively cover a broader map of the powered system. The gas producer can, therefore, operates at the necessary speed to build the horsepower needed by the powered equipment including centrifugal compressors or pumps.

The design for most gas turbines used in an industry requires the inclusion of the gas turbine in a simple frame with all of the necessary components for the fundamental operating unit. This includes the following systems:

In general, additional operating systems required are all pre-engineered packaged systems that the turbine producer can supply and customize. Systems like:

The main focus of Linquip in this piece of the guide was on gas turbine types plus going further to read about different kinds of compressors and combustors. If you like to leave your constructive feedback on the topic after reading it, please sign up and share your views.