The gap between the rotor and stator, and hence the direction of magnetic flux between the two, is positioned parallel to the axis of rotation in an axial flux motor, rather than radially as in the more typical radial gap motor. The Axial Flux Motor is a significant result of using Industrial Tools. Axial Flux Motors are available from a variety of Suppliers and Companies, as well as various manufacturers and distributors, and there are many Axial Flux Motors for Sale on Linquip.

There is a complete list of Axial Flux Motor services on the Linquip website that covers all OEM fleets. Linquip suppliers can assist you with this. Please contact Axial Flux Motor Experts in Linquip to learn more about how to connect with a diverse group of service providers who consistently deliver high-quality products. 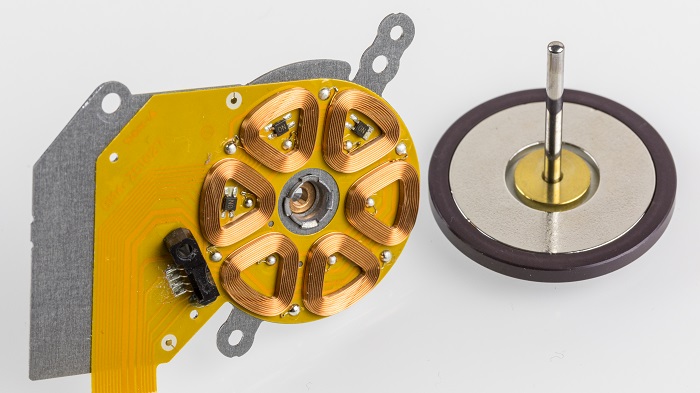 What is Axial Flux Motor

The world’s first motor is of the axial flux type. Even though axial flux motor is not new, its use has only risen in the last two decades. For many years, it was used in stationary applications such as elevators and agricultural machinery, but over the last decade, several developers have worked to improve the technology so that it can be used in applications such as electric motorcycles, airport pods, delivery trucks, electric cars, and even aircraft.

It progressed from prior DC brush-based axial flux designs to AC and a completely sealed brushless design, and it was built from the ground up for mass production. When switching from DC to AC, the design has fixed coils and twin rotors with permanent magnets instead of a rotating armature.

Axial flux motor is ideal for high torque density and space-constrained applications. Most people assume that high power density is only determined by fast speed, and they ignore the impact of torque density. The quest for high speed alone will result in limited-service duration and noise. Indeed, the heart of a high-speed motor is the increase in torque density, and an axial flux motor is a common solution among them. 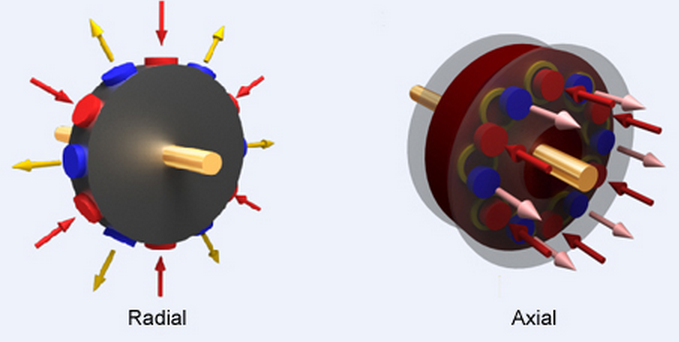 The architecture of the motor is a variant of what is known as an axial flux, or axial gap, machine. Because of their very low axial length-to-diameter ratio, axial flux motors are frequently referred to as ‘flat’ or ‘pancake’ motors. They produce a lot of torque, but their speeds are limited due to the rotor’s design. This can be mentioned as one of the axial flux motor disadvantages.

The radial flux motor has the classic cylindrical design, whereas the axial flux motor is fashioned like a biscuit tin, and they lend themselves to alternative installations based only on shape. Because it is longer but smaller in diameter, the conventional radial flux is a natural match between two wheels on a single axle.

The magnets on the rotor of an axial flux motor, like all forms of AC synchronous electric motors, are attracted to the spinning field generated by a surrounding ring of independent electromagnets in the stator. Because the switching of the magnets that causes the field to revolve is not perfectly smooth, the rotor suffers from a tiny ‘torque ripple’ known as ‘cogging’ as it turns.

The majority of hybrid system motors are of the radial flux type, in which a rotor supplied with permanent magnets rotates within a wound stator. Because there is a tiny gap between the outer surface of the rotor and the inner diameter of the stator, these motors are known as a radial gap or radial flux machines, and they may generate a lot of power because they can run at high speeds.

Axial flux motor is considered superior to a radial flux motor. There are four reasons why Axial Flux motors provide substantially more power while having a lower weight density:

In terms of winding, axial flux motor has a significant advantage over radial motor. It has a greater active winding copper and less overhang, which means it can increase the number of turns more easily and generates less heat due to the end effect. Furthermore, the winding might come into touch with metal, which is an excellent heat conductor. This translates into a simpler cooling system.

In radial flux motor, a substantial portion of the windings is inactive (the portion located on the outside of the stator teeth that is only utilized to form loops (coil overhang). The coil overhang adds to the electrical heat dissipation. Thus, it is referred to as “distributed winding,” and it results in a considerably lower total power/weight ratio, whereas axial flux machines have no coil overhang at all. The heat in a radial machine should be evacuated through the stator core, which should be constructed of low thermal conductivity steel.

Because axial flux motors contain a greater amount of electromagnetically active material, the percentage of winding mass that produces no torque but causes losses is smaller in axial flux machines. In radial flux motors, the magnetic flux passes through the first tooth and then through the stator to the magnets. Of contrast, the flux route in Axial Flux motors is shorter, i.e. from the first magnet, through one core, and directly on the second magnet.

Furthermore, in the case of radial flux machines, the flux must travel in two dimensions. The flux route in axial flux machines is one-dimensional. As a result, there are lower iron losses as the flux travels through the cores. Furthermore, the use of Oriented steel allows the flux to pass more easily, resulting in an extra efficiency benefit.

Heat must be transferred via the stator to the exterior of the machine in the case of radial flux machines. However, steel is a poor heat conductor. The “coil overhang” is particularly difficult to cool since it is not in direct contact with the motor casing. Axial flux motors provide good cooling since the windings are in close contact with the outside aluminum shell. Because aluminum transmits the heat easily, the windings of axial flux motors remain cool while the resistance of the copper stays low. And, this leads to much-improved performance. These benefits typically enhance efficiency, which makes a significant effect on a worldwide scale.

Read More on Linquip
What is Motor Shaft?

Despite its technological benefits, axial flux motor offers significant design and manufacturing problems, making it much more expensive than its radial equivalent. Axial flux motor is versatile and the winding can be varied by geometric arrangement according to the design specific diameter, allowing for a significant reduction in the total volume occupied by the machine. Axial flux design has posed some serious design and production challenges as well:

Mechanical challenges: Because of the strong magnetic forces operating between the rotor and the stator, keeping a high-tolerance uniform air gap between these two components is a challenging engineering and material problem.

Thermal issues: Windings of an axial flux motor are situated deep within the stator and between the two rotor discs, posing a bigger cooling problem than in a radial flux direct drive system. Axial flux electric motors feature magnets that are positioned in planes parallel to the coils, allowing them to generate magnetic flux across a smaller rotational volume, resulting in a decrease in the moment of inertia and overall mass of the rotor.

In contrast, radial flux motor took the lead in development and became known as the simple motor. Thank you for taking the time to read our post. We hope it has helped you learn about axial flux motor. If you are looking for more information about axial flux motor, we propose that you register at Linquip. Then feel free to leave your comments and questions.

If you want to know more about the Axial Flux Motor and Its Working Principle, download this file.

2 thoughts on “What is Axial Flux Motor and It’s Working Principle?”