A series wound DC motor like a shunt wound DC motor or a compound wound DC motor, belongs to the self-excited DC motor group, and it derives its name from the fact that the field winding is linked internally in series to the armature winding in this case. Unlike a shunt motor, the field winding is therefore exposed to the whole armature current. Several Suppliers and Companies, as well as various manufacturers and distributors, provide various series DC motors, and there are several Series DC Motors for Sale on Linquip.

Based on the type of electrical connections between the field windings and the armature circuit, self-excited DC motors are classified into three categories of Series, Shunt, and compound, each with its own unique characteristics. The following article’s main discussion is on series DC Motors. So, if you are interested in knowing more about the characteristics, working principle, advantages, disadvantages, and the application of series DC motors, you’ve come to the right place.

What Is a Series DC Motor?

Series DC motors are a group of self-excited DC motors in which the field coil is connected in series to the armature winding and thus a higher current passes through it.

A series DC motor mission is to turn the electrical energy into mechanical one based on electromagnetic law. In this process, the cooperation between the magnetic field present around a current-carrying conductor and an outside field results in a rotational motion on an output shaft.

After this short introduction to Series DC motors, let’s turn to more important matters now and discuss the parts and working principle of these motors so that you can make an informed choice based on the requirements and conditions. 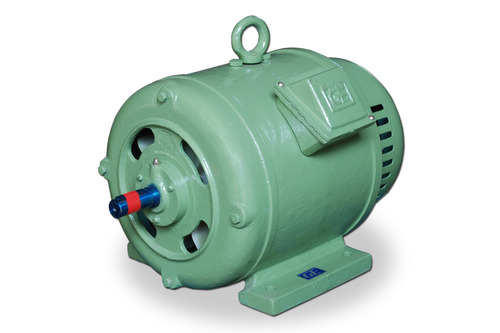 A series DC motor is very similar to other brushed DC motors in case of structure and parts. It, too, consists of components like stator, commutator, armature, axle, brushes, and field windings that are typical components of such rotary electrical machines.

As mentioned before, in series DC motors, the field windings are connected in series to the armature windings and thus an equal current passes through them from the supply. As a result, field coils of such motors are made of thick wires with low resistance and few turns to be able to carry that heavy load of current.

How does a Series DC Motor Work?

A series DC motor converts electric energy to mechanic energy based on the electromagnetic principle. In this type of DC motor, a power supply terminal sits at one end of the armature and field coils. By applying the voltage, power starts in these terminals and passes through armature and field windings.

As conductors in this windings are huge, they have minimal resistance. As a result, the motor gets a huge supply of power from the terminals. By the flow of this large current in the armature and field coils, a strong magnetic field is produced that creates a massive torque in the shafts. This strong torque, in turn, spins the armature and produces the target mechanic energy.

Series DC motors have their own flaw and it’s that their speed is very much dependent on the load; the heavier the load is, the lower the speed of the motor’s armature will be and as the load gets lighter, the speed will rise accordingly. Consequently, by removing the load completely, the motor would operate so fast that the armature might fall into pieces.

Keeping this feature in mind, let’s move to the next section of the article that is on the applications of series DC motors. 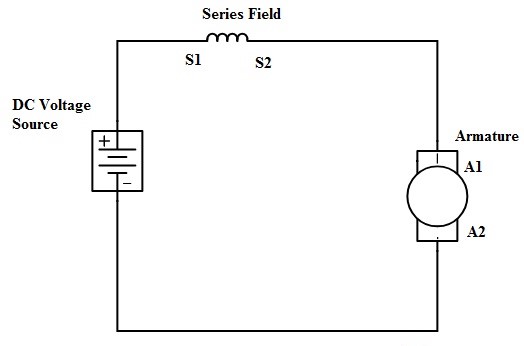 What Are the Applications of SDC Motors?

Some of the important points we’ve learned so far about series DC motors is that they produce high starting torque and operate properly under heavy load conditions. These features make SDC motors a good choice for industrial applications.

These motors are used in airplanes as engine starters and the source to raise and lower the wings and cowl. They can also start an automobile’s engine and are a good choice to be used in mobile electric equipment, tiny electrical appliances, winches, and hoists. SDC motors’ changeable speed also makes them useful in tools like vacuum cleaners, sewing machines, elevators, and etc.

In cases when stable speed is an important factor, however, series DC motors are not the best option. That is because their speed is dependent on the changes in the load. Moreover, changing their speed is not an easy task. So it is better to go for more suitable designs that are on the market.

Series DC motors come with their own pros and cons that are listed below:

The disadvantages of DC series motor include the following:

This article provided all the essential information you needed to know about the series DC motors. Moving from a comprehensive definition, the differences between series DC motors and other types of such motors are revealed and its structure is mapped.

Deeper into the subject of introducing series DC motors, the article goes on to explain what these motors do, how do they work, and where they can be used. Then, the production of high starting torque and requiring heavy load conditions to work properly were discussed as the two main features of such motors.

Finally, in the last section of this article, the pros and cons of using series DC motors were investigated.

What is DC Motor?
DC Motor For Sales

If you have any information and personal experiences regarding series DC motors, please share it with us. And if you have any questions about this type of DC motors, their function, parts, and applications, you can always consult our experts at Linquip. All you need to do is to sign up.