Air pressure controls the piston actuator that lifts the valve plug from its seat in angle Seat Valves, which are pneumatically actuated. With flow over the seat (causing the valve to close), full working pressure is achieved, and the water hammer can be mitigated by reducing compressed air supply flow. When compared to other valve designs, the angle seat layout has the advantage of offering a high flow rate with reduced pressure loss. The reduction of water pounding and backflow resistance are other advantages. Angle seat piston valves are ideal for applications that require high flow rates and temperatures, such as steam or water. Some versions of angle seat piston valves can be used in reverse to eliminate water hammer during operation. 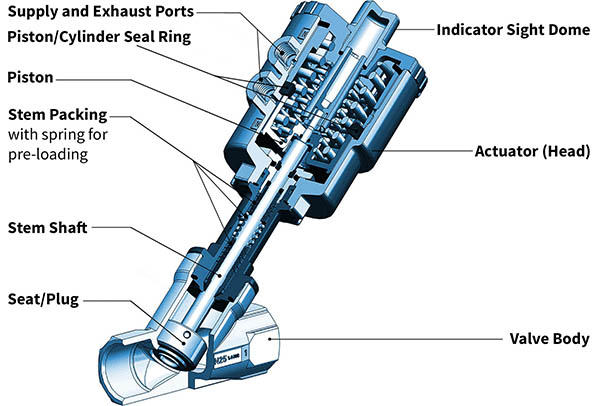 What is Seat Valve?

A pneumatically controlled angle seat piston valve has a piston actuator that provides a linear actuation to lift a seal off its seat.

Function of a Seat Valve

Pneumatic valves are controlled by a pressurized pilot medium, which can be compressed air, oil, or water.

The valve has a pneumatic actuator that is powered by a three-way solenoid valve. The pressure of the pilot medium works on the piston in the actuator cylinder, allowing the seal to open or close through the stem. The return of the seal to its rest position is normally accomplished by a return spring in the pneumatic actuator.

There is no return spring in the double-acting arrangement, and the pilot medium is utilized to open and close the valve.

When the valve is in the open position, a red indicator is visible via the sight dome on the top of the actuator.

The pressure range is determined by the pressures of the pilot and controlled mediums, as well as the flow direction, as well as valve design factors such as orifice diameter, actuator cylinder diameter, and spring force.

Working Principle of a Seat Valve

Angle seat valves are pneumatically actuated, with air pressure controlling the piston actuator that lifts the valve plug from its seat. In unpressurized settings, normally closed (NC) valves have the valve closed and use a spring to return the valve to its rest state. The valve opening is constantly open in Normally Open (NO) valves unless air pressure acts to close it. If the spring is put on the other side of the piston actuator, a NO valve can be obtained. Double-acting valves are capable of controlling flow in both directions.

The position of these valves is determined by the supply air and does not have a spring. The pressure rating of the valve is influenced by these configurations. Flowing up and under the valve (causing the valve to open) decreases the water hammer effect, but it also reduces the valve's maximum working pressure by about half. However, installing a strong return spring will help raise the operating pressure, but this will necessitate the use of a larger actuator to compensate for the higher spring strength. Full operating pressure is obtained with flow over the seat (causing the valve to close), and the water hammer can be reduced by reducing compressed air supply flow.

You can find a great deal of Seat Valve Companies and Manufacturers in Linquip, along with expert Service Providers.

Construction and Design of a Seat Valve

They have a sturdy design similar to globe valves, however they use a piston-operated angle seat valve with a closing spring instead of a globe valve. In most cases, the body is cast or die-forged in one piece. The piston's end is attached to a plug, which is situated on PTFE seats. The piston is designed to retract deeper from the seat, allowing for the highest flow rate possible. Normally Closed (NC), Normally Open (NO), or Double Acting are the three types of normally closed (NC) and normally open (NO) valves. The piston actuator is available with threaded ports or NAMUR ports for attaching NAMUR style solenoid valves directly.

In demanding applications such as steam, water, and aggressive media, these valves can give millions of cycles of operation. They're perfect for vacuum applications and can handle up to 1000 cycles per hour in fast-acting applications, with a life expectancy of over 10 million cycles. They're used in a variety of industries, such as food and beverage, chemical, oil and gas, water and sewage, and so on. 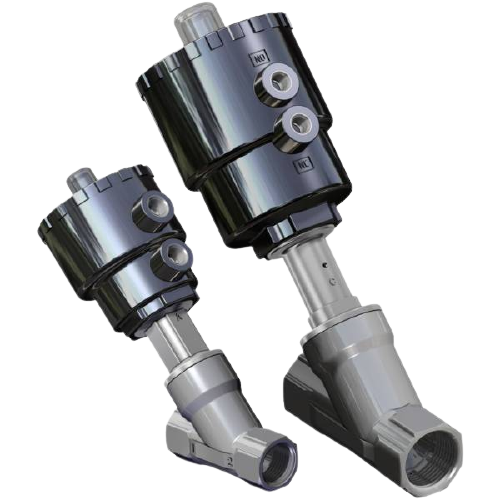 Seat valves have applications in a variety of industries (Reference: omal.com)

Angle seat valves come in many different sizes and end connectors. The most popular valves have thread sizes ranging from 1/2" to 3" BSP or NPT. Flange alternatives are available from some manufacturers. The valve seat's nominal diameter (DN) aids in size selection, although most manufacturers specify the Kv-value, which is a more reliable metric for size selection. The Kv-value is a measurement of water flow rate at a 1 bar pressure decrease. The flow rate can be determined using a formula if the media properties, pressures, and Kv-value are known. It's simple to figure out the minimum required Kv-value for your application using our Valve Sizing Calculator. The correct valve size allows for a high and efficient flow with reduced wear and leakage.

The maximum operating pressure is typically in the range of 5 to 20 bar. The pressure of the medium must be taken into consideration and the pressure (range) of the compressed air circuit. With PTFE (Teflon) sealing, they can withstand temperatures of up to 200 °C. Other sealing materials with lower temperature ratings include NBR (Nitrile Buna Rubber), FKM (Viton), and EPDM. The housing material has an impact on the temperature and pressure rating. Bronze, 314 or 316 stainless steel, brass, plastic, and gunmetal are common housing materials. Stainless steel has the best corrosion resistance and material strength of all of these materials. As a result, stainless-steel housings with PTFE seals are used in the majority of high-pressure or high-temperature angle seat valves. The piston housing can be made of the same material as the valve body, however, some are made of plastic to save weight and money.

Linquip offers a wide variety of Distributors, Experts, and Equipment for Sale of Seat Valves.

Angle valves are widely applied in boiler feedwater and heater drain service, as well as in piping designs when space is limited and the valve can also function as an elbow.

The intake and outflow ports of an angle valve are perpendicular to one other. It's classified as a manual valve, and it's typically used to halt or control the flow of a liquid in a pipe, which is why it's also known as a stop valve.

Angle seat valves are pneumatically actuated, with air pressure controlling the piston actuator that lifts the valve plug from its seat. Full operating pressure is obtained with flow over the seat (causing the valve to close), and the water hammer can be reduced by reducing compressed air supply flow.